FUMC’s annual Thanksgiving dinner: ‘It’s our gift to the community’ 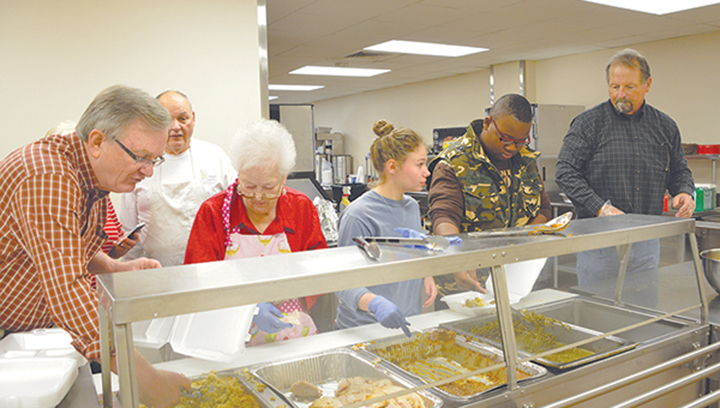 File photo/Rev. Tom Atkins of First United Methodist Brookhaven (left) oversees a team of volunteers at a previous Doug Sullivan Community Thanksgiving Lunch held at the church’s Ministry Center. A free lunch will be served Thanksgiving day at the center from 11 a.m. to 1:30. Carryout meals and deliveries will be available.

Karen Sullivan is drowning in a sea of sweet potatoes.

On Thursday, the Brookhaven alderwoman-at-large picked up Brookhaven High’s donation to the annual Doug Sullivan Community Thanksgiving lunch — enough cans to fill two cars — and took it to First United Methodist Ministry Center where it will be transformed by talented cooks into enough sweet potato casseroles to feed an Army, or at least hundreds of hungry Lincoln Countians.

Toting taters was just one of her many errands this week as she and dozens of other volunteers get geared up for the 10th annual holiday meal, which was named for her late husband.

Sullivan said volunteers will start the final preparations next week — baking, basting, chopping, dicing and creating a delicious meal for the community.

The free lunch will be served at the ministry center of First United Methodist beside the old post office from 11 a.m. to 1:30 p.m. They can be eaten there or picked up. Deliveries are also available by calling 601-833-3519 or 601-695-0600 before Thursday so volunteers can load up Thanksgiving morning and head out to share some good will and turkey.

Sullivan and her family will be doing just that Thanksgiving day. “That’s my favorite part, with my children and my grandchildren,” she said.

Everyone is happy to get the plates of turkey and dressing, green beans, casserole and desserts, she said. “They’re so well received and it’s so nice, doing for other people. You receive the greatest blessing.”

Sadly, it’s a blessing her late husband never got to see. Sullivan, the mayor of Brookhaven from 1993-97, died in 2007 on his way to work at Sen. Thad Cochran’s office. He was still near their home, traveling on Hwy. 51 when he apparently had a medical emergency, she said. Their goodbye that morning was their last words to each other.

He’d always wanted to host a community dinner where they could feed anyone of any race, social status or income — especially those who might not enjoy a Thanksgiving meal otherwise.

“It was a passion of his,” she said. “He mentioned many times he’d like to do this, that he’d like to serve the community in this way.”

But their church didn’t have the facilities to accommodate that many people or a kitchen large enough to prepare the meals. When the new ministry center was completed in that same year, equipped with an industrial-sized kitchen, the event seemed to come together by design.

The first year, volunteers went door-to-door offering the meals, and very few came to the ministry center. Now, Sullivan said, many people come and enjoy their meal with others at the center, and there is a long list for deliveries. “Now they get a lot of calls. We don’t mind delivering at all,” she said.

It’s truly a community event, she said. She’s grateful for all the many volunteers who donate labor, food and money to make sure the lunch is a success. “It’s our gift to the community,” she said.