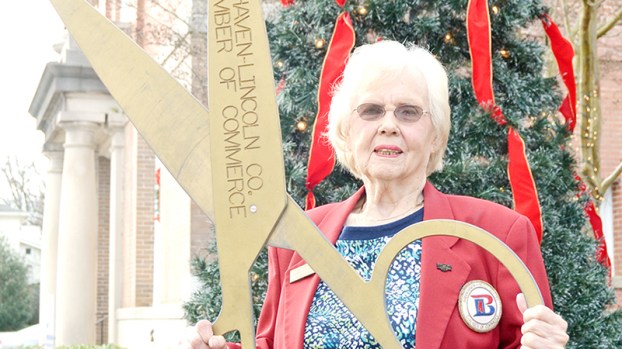 Photo by Donna Campbell/Catherine Dickey will be 92 in February, but has no plans slowing down. Dickey has served as a volunteer ambassador for the Brookhaven-Lincoln County Chamber of Commerce for more than 20 years.

While most people slow down and relax after retirement, Catherine Dickey packs as much as she can into that extra free time on her hands.

The Brookhaven widow, who will celebrate her 92nd birthday Feb. 22, has most of the boxes filled in on her weekly calendar.

On Mondays, she’s at the bank helping to count the tithes from Sunday services at First Baptist Brookhaven, where she serves on the finance committee. She’s on the boards of the Brookhaven Housing Authority and the Mississippi Adolescent Center.

She attends prayer meetings on Wednesdays at her church and on Sundays she’s smiling at visitors and greeting them at FBC’s welcome center.

And in between it all, she’s an ambassador with the Brookhaven-Lincoln County Chamber of Commerce.

If there’s a hand to be shook, a ribbon to be held or a business to applaud, Dickey dons her red jacket and makes an appearance.

She’s been doing it for more than 20 years and has no plans to stop.

Dickey only worked at two jobs in her lifetime. The most recent, which she left in 1995, was as the front window clerk at Entergy in Brookhaven. She collected the money from customers paying their bills.

“I enjoyed that very much, the fellowship with the customers,” she said. “I enjoyed every minute of it.”

She saw the same people every month for two decades and developed a deep friendship with some. She likes to run into former customers at the grocery story and reminisce. “We just have the best time talking,” she said.

After her husband died 25 years ago, she traveled a bit with friends from church. Then Shannon Aker, a new employee at Bank of Brookhaven, suggested she volunteer at the Chamber of Commerce.

“I was honored,” she said. “When you work, you don’t have time to do anything extra.”

Aker first met her at the Entergy office and was drawn to her smile and friendly, positive attitude. “She is a super kind person,” said Aker, who is now president of the bank. “She’s always finding the positive in things. She’s the golden rule in life. She doesn’t say anything bad about anybody.”

Dickey never had time to be involved in community events and projects when she was at Entergy. She worked and was a wife and mother.

Now she can do things for her community she couldn’t do before. “I like to give back,” she said.

As a Chamber ambassador, Dickey is on hand for business grand openings and ribbon-cutting ceremonies. She’s alway hopeful with each new venture that the owners will find success.

“You just say a little prayer within yourself that they’ll be prosperous,” she said.

Dickey needs both hands to count her blessings — her son and his wife, her three grandchildren and her six great-grandchildren — but 10 fingers isn’t enough.

She’s got her health and her hometown as well. “I’m just happy the Lord has blessed me with good health,” she said.

And as for Brookhaven, she can’t imagine living anywhere else. “I love Brookhaven,” she said. “I don’t ever want to leave.”