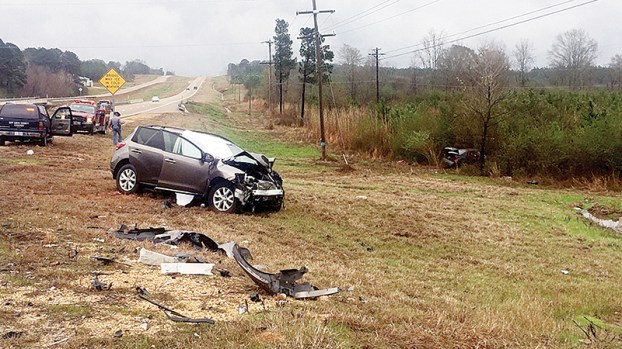 Photo by Holley Cochran/The Prentiss Headlight Troopers with the Mississippi Highway Patrol Sunday investigated a fatal two-vehicle crash on Hwy. 84 in Jefferson Davis County. Two Brookhaven women were killed in the collision, which also took the life of a New Hebron man.

Luna Harper, 74, of Brookhaven, was pronounced dead at the scene of the crash, which occurred Sunday shortly before 1:30 p.m. in Jefferson Davis County.

Harper’s husband, Jerry B. Harper, 75, was taken to the same hospital, then was transferred to Forrest General Hospital in Hattiesburg. His injuries are not life-threatening.

Evans was a passenger in the Harpers’ car.

No cause of the crash has been determined, Poulos said.

It’s a tragic coincidence for Evans’ family. The woman’s granddaughter, Enterprise kindergartner Karlianna Brumfield, was shot and killed accidentally by her 13-year-old brother with a pellet gun on Jan. 1, 2014.

Visitation will be today from 5 until 9 p.m. at the funeral home.

Harper’s funeral is Friday at 10:30 a.m., also at  Riverwood, with burial at Union Baptist Church cemetery.

Visitation will be Thursday from 5 until 9 p.m. at the funeral home.

During the MHP’s New Year’s holiday enforcement period, which began Saturday at 6 p.m. and ended Sunday at 11:59 p.m., troopers issued 1,276 citations with 44 DUI arrests statewide. They investigated 94 motor vehicle crashes, which included 24 injuries and four fatalities on state and federal highways and interstates.

Troopers are also investigating a fatal crash involving one vehicle in Jasper County.

A 2008 Honda Civic driven by Nelson Sorto, 31, of Lilburn, Georgia, was traveling southbound on I-59 about 3:18 p.m. Sunday when the car left the roadway and collided with tree.

A passenger, Bayron A. Gomez, 30, was pronounced dead on scene, Poulos said.

“Due to inclement weather experienced over the weekend, MHP investigated a high number of traffic crashes throughout the short but deadly holiday period,” he said.

In Troop M — which includes Lincoln, Lawrence, Pike, Franklin, Jefferson, Adams, Amite and Wilkinson counties — the highway patrol did not see any fatalities over the weekend, according to a report released Monday.

However, they investigated seven collisions, with one alcohol related. The collisions resulted in six injuries.