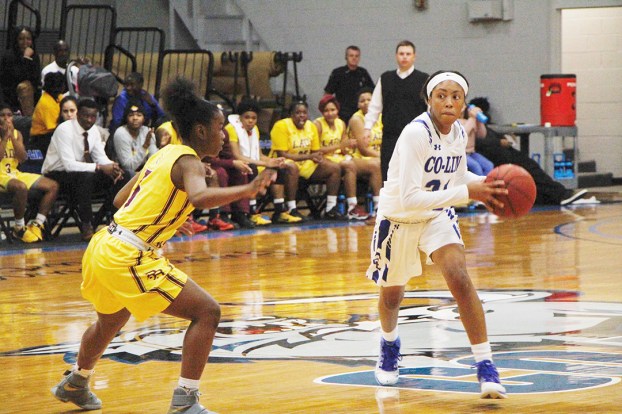 The Copiah-Lincoln Community College Lady Wolves moved to 14-1 on the season and 7-0 in the MACJC South Division after a decisive 78-56 victory over Pearl River on Monday night. The win is the Lady Wolves 10th straight. Co-Lin takes the floor again Thursday as the Lady Wolves hosts the No. 21 Jones County Lady Bobcats. Tipoff is scheduled for 6 p.m. and fans are asked to wear camouflage. Watch the game live at colinathletics.com or listen live at WMJU 104.3 FM in Brookhaven.

“We shot the ball so good tonight, especially in the first half,” said head coach Gwyn Young. “It allowed us to get a lot of girls on the floor…I’m pleased with our effort tonight, but we need to understand that nights that we don’t shoot the ball well we have to play solid.”

In the opening half of play the Lady Wolves seemed unable to miss. Co-Lin started the game with three consecutive three-point baskets, followed by an onslaught of offense that bolstered the Lady Wolves’ lead to 18 points with 8:58 remaining in the half. The 14-1 run was the result of several buckets made from both in the paint and beyond the arc. Entering the locker room the Lady Wolves were shooting a blistering 69 percent from the floor and 67 percent from down town.

The impressive offensive performance slowed in the third and fourth quarters for Co-Lin as several Lady Wolves saw time on the court and coach Young’s offensive became conservative. Even with the slowed down level of play Co-Lin netted 29 points in the half and shot 40 percent from the field.

Brittany Rose led the Lady Wolves in the scoring column with 19 points and had five assists. Tenazhia Hinkson finished the night with 15 points after going 5-for-7 from beyond the arc. Danisha Davis came of the bench to score eight and pull down a team high six rebounds.