Currie: They are not criminals 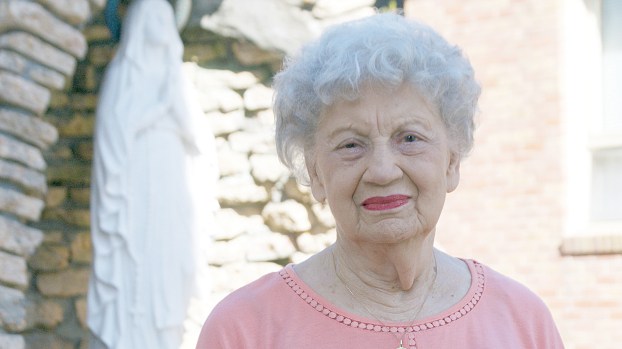 Photo by Donna Campbell/Mary Ratliff spent all but three of her 90 years in Brookhaven. She’s known around town for her smile and happy attitude.

Mary Ratliff: Everybody knows her name

There’s something about Mary.

It could be her smile, her can-do attitude or her sweet personality. But whatever it is that makes people refer to her as a jewel has been 90 years in the making.

Mary Ratliff turns the big 9-0 next week and folks have been calling her to wish her a happy birthday. The family is hosting a party Saturday to celebrate her milestone at Mitchell’s from 1 to 3 p.m.

“She was just a jewel,” said Cathy Ditcharo, whose late husband, Wade, ran a dental office in Brookhaven for 24 years. Ratliff kept his medical records in tiptop shape from the day he opened until the day his office closed.

“She knew everyone who walked through the doors,” Ditcharo said. “That was an asset.”

Ditcharo said her husband didn’t know anyone when he decided to open a practice in Brookhaven and met Ratliff at the tax office when he went to pick up some paperwork. She was working for her friend who was the tax collector at the time. She introduced herself to the new dentist in town and asked if he needed an employee.

He hired her in a heartbeat.

“She knows everybody in town and she only had great things to say about everyone,” Ditcharo said. “She is a sweet lady and a kind person with a gentle smile. She was a vital part of our family for 24 years and she still is.”

The late dentist’s daughter, Amy Ferguson, said her father was quick to tell people he owed a lot of his success in Brookhaven to Ratliff. “He gave Miss Mary a lot of the credit,” she said. “When he opened his practice, he didn’t know anybody. She knew everyone in the community. He thought very highly of her. She’s a jewel, just precious.”

Wade Ditcharo’s sister, Brenda Smith, ran the front office while Ratliff worked in the back. They spent 17 years as co-workers but have had many more as friends.

She said Ratliff taught her to be patient with patients and was particular about how things should be done. “She’s meticulous,” Smith said. “She’d say, ‘Brenda, we’ve got to do it this way because that’s the way it has to be done. You can’t take that shortcut.’”

The two went out for a birthday dinner this week with good food, great conversation and colorful balloons. “Everybody came by and gave her a hug,” she said.

Smith said she misses her at the office and tried to talk her into coming back. “I told her anytime she felt like she wanted to come by she could,” she said. “She can just sit and look at the patients and wave to them.”

Before she worked in a dental office, Ratliff spent more than two decades in a doctor’s office.

Insurance agent Joe Crawford remembers getting his shots from Ratliff when he’d come to his dad’s practice. His father, the late J.P. Crawford, treated Joe and his three siblings’ aches and pains, which means Ratliff treated them, too.

She worked for Dr. Crawford from the late 1950s to the mid-‘80s. She wasn’t a registered nurse, but she knew how to heal a hurt.

“Her nursing capabilities were excellent,” Joe Crawford said. “Not only did she attend to each patient’s needs but she had a relationship with most of them. She cared and it showed. She truly epitomized what the profession of nursing was all about. All of us kids in the Crawford family truly loved and appreciated her. I  think I can speak for all of our family, when I say thank you, Mary, for taking care of all of us.”

Ratliff was born in Brookhaven to Fred and Katherine Getwan, German immigrants who settled here in Lincoln County.

She married Buddy Ratliff, a man from a blue-collar family — they owned Ratliff Sheet Metal Works — and no C in his name.

Her father-in-law loved to tell people about that missing C. “He’d say, ‘Those people who had a C in their name stole cattle. That’s why they put that C in there,’” she said.

The Ratliffs had four children and then her parents came to live with them. “So I went to work,” she said.

A friend told her that she was moving to Natchez and asked if she’d like to have her job at Dr. Crawford’s office. Ratliff had worked in a surgeon’s office during the three years the newlyweds lived in Tennessee — the only time she lived away from Lincoln County — and thought she’d like it. She worked with Dr. Crawford until he retired, and then she worked some more for the doctor who came after him, but then he died.

Since she wasn’t working, her friend the tax assessor called and asked her to come work for her during tax time. That’s when Dr. Ditcharo came into the tax assessor’s office and she was on to her next adventure. “It just kind of fell in my hands,” she said.

Ditcharo and his family also attended St. Francis of Assisi Catholic Church in Brookhaven, so Ratliff not only worked for him, but worshipped with him as well.

When Ditcharo died, Nic Belk bought the practice. “He bought the office. He just kept me,” she said.

She’d probably be working there now if a case of the shingles hadn’t waylaid her. “That just opened a can of worms and I couldn’t go back,” he said. “I loved it. Every minute of it. I love people.”

Without a day job, Ratliff has turned to other avenues to stay busy. Her oldest son, Norman, recently retired and moved from Jackson into her house near Heucks Retreat that’s been her home for 62 years. He brought all of his belongings with him so they’ve been busy sorting what’s his, what’s hers and what’s got to go.

Her daughter, Margaret Smith, lives next door, and daughter, Jane Smith, lives in Jackson. Both of the Ratliff girls married Smith men, though not related.

She still hurts for her youngest son who died in 2015, but thinking about her four grandchildren and three great-grandchildren makes her happy.

The great-grands are her biggest joy, which is how it usually is. While she has time for them now, that’s not the case for them. “They don’t have time for Granny,” she said, laughing. “They’re into everything.”