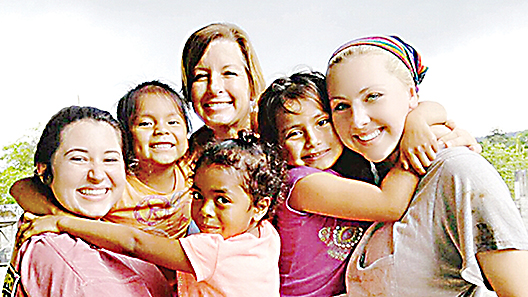 Photo submitted/Missy Clanton, far right in bandanna, will be going to Casa de Fe with volunteers like Autumn Tamor, far left in red shirt, to serve children in Ecuador for the third time this summer.

His name is Telmo, and he was the child Missy Clanton met at the Casa de Fe orphanage in Shell, Ecuador when she was 13.

“It was my first trip ever out of the country, so I was just excited to be there,” Clanton said. “Once I got there, it wasn’t much of a struggle for me. This is my third time going, and I’m going without my parents for over a month.”

The 18-year-old will spend her summer — from May 25 to July 2 — serving children in Ecuador like Telmo.

He couldn’t walk when she first met him, but all of that changed two years later.

The Brookhaven native said watching the children move is like witnessing a miracle. The experiences at Casa de Fe have inspired her to major in kinesiology with a Spanish minor at Mississippi State University after she graduates from Brookhaven Academy this year.

Arnold now lives in Ecuador fulfilling this mission of taking care of the mentally, physically and spiritually disabled children.

“The jungle tribes in the Amazon believed that any children born with a disability was possessed by the devil and they had to kill it,” Clanton said. “The parents of the newborn babies couldn’t bear to see that so they would hike several days through the jungle into the city of Shell, Ecuador.”

The orphanage is one of the safe havens in Ecuador still saving children’s lives today.

Clanton did not know what she was getting into in 2013, but she is so thankful she went to the orphanage.

She is learning how to speak Spanish so she’ll be able to have conversations with the children this summer.

She wants to share her faith by sharing devotions iwth children in their language. She also wants to talk to the young women who came from the government to the orphanage. Most were raped and abused.

“The thing that I really want to express to them is that they’re more than they think they are,” Clanton said. “They have such low self-esteem.”

Clanton credits Casa de Fe for helping her find her purpose in life. She encourages others to volunteer there as well.

“This is real life. You go home and think this is fairy tale life, and it’s not what matters,” Clanton said. “There would be a lot less problems in society if people went to see because they would understand what really matters.”

Clanton will start at MSU in the fall with aspirations to start her own clinic in Mississippi for children with disabilities after she receives her doctoral degree.