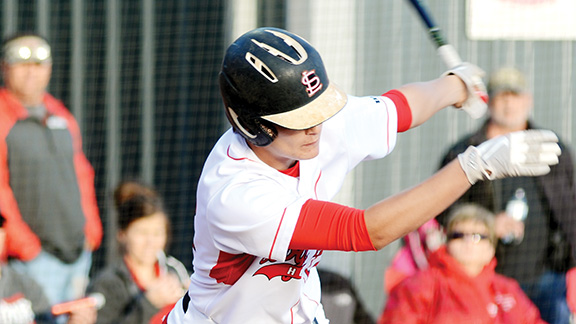 Senior Konner Allen of Loyd Star (12) swings for the fences in a recent game. (Photo by Dylan Rubino)

Cade Hodges pitched a shutout game, and Loyd Star was able to put the game away in the sixth inning, winning 4-0. The win moves the Hornets to 34-1 on the year.

Despite both teams getting runners out in the first inning, pitching and defense kept the game scoreless until the fifth inning. With two outs, Konner Allen blasted a home run, giving the Hornets a 1-0 lead. St. Joseph was able to get Tucker Watts out at third as he attempted to steal.

The Hornets would add three insurance runs in their half of the sixth. With bases loaded, and no outs, Dylan Smith hammered a bases-clearing, three-run RBI double. St. Joseph ended the inning by getting the final two outs at home, to give themselves a chance at staying in the game. St. Joseph attempted a comeback in their half of the seventh. With one out, Charlie Rooks hit a double.

The Hornets would strand Rooks, as Hodges was able to get a key strikeout and a groundout to keep his shutout intact.

Hodges pitched all seven innings for the Hornets. He struck out 12, walked one and allowed only three hits to pick up the shutout win.

Allen had a home run and a single. Smith had a three-run RBI double. Cole Smith had two doubles. Watts had a double. Hodges, Bradyn Brister and Dane Smith each had a single.

“Was real proud of the intensity level we brought tonight. Thought Cade Hodges did a great job on the mound tonight, striking out 12 batters,” Coach Jared Britt said. “Defense played a really great game behind Cade. Thought we hit the ball really well tonight. Konner’s homerun opened up the score for us, which was a big momentum change for us. Dylan Smith’s three run RBI double gave us our four run lead.”