Edgewood Mansion to be brought back to its former… 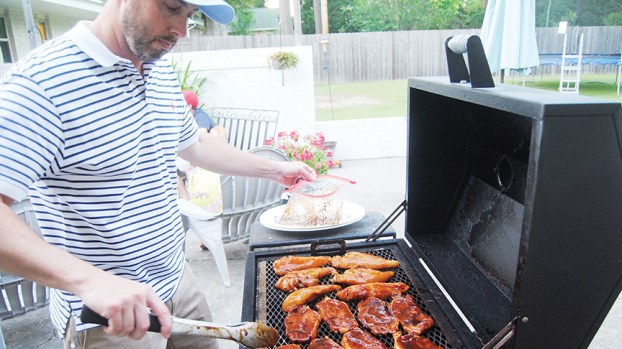 Photo by Matt Rushing/Michael Gates of Brookhaven grills some of his favorite meats.

Time to fire up the grills, summer is here in Brookhaven

The smoke rises, the smell grabs your attention and your mouth begins to water. It’s grilling time in Mississippi. Memorial Day is the unofficial start of summer, and nothing screams summer like firing up the grill.

But pulling off the perfect grill-out or barbecue isn’t as easy as it looks. We talked to meat experts for their tips on how to pull off the ultimate grill-out.

“My favorite choice of meat is a choice boneless ribeye,” said Will Jordan, owner of Diamond J Meat Market. “Barbecue chicken is also really good. My suggestion to people who are smoking meat is to set your temperature at 230 degrees and have a meat thermometer. A meat thermometer is your best friend.”

From Boston butts, to ribs and brisket, Jordan suggests that individuals cook what they like.

“I always tell people that it’s like picking a car, you can choose between a Dodge, Chevy or Ford, everyone’s different so get what you like,” he said.

“When I’m grilling chicken, sometimes I’ll use a 30 minute marinade,” said Gates. “I’ll use Lawry’s teriyaki sauce. It’s perfect for last minute grilling because you can just marinate it for 30 minutes. For pork chops, I’ll marinate them with Dale’s low sodium marinade. It’s quick and it doesn’t take too long. Just prep it for 30 minutes and it usually cooks on the grill for 15-20 minutes. If you’re just getting home from work and don’t have much time, in my opinion it’s easier than going out.”

“If you have more time on your hands, my favorite chicken marinade is Italian dressing, Worcestershire sauce and Montreal steak seasoning. Mix it all together in a zip lock bag and let it marinate for 24 hours,” Gates said. “You can do steaks like that as well, that’s my favorite.”

Some people like a quick fix, others prefer to smoke their meat all day long. Jackson Roberts of Bowie’s BBQ says the secret to great barbecue is having great ribs.

Whatever your choice of meats, you can’t forget the sides. Below is a recipe for grilled corn courtesy of a reader.

Take four ears of corn, mix 1.5 cups of sour cream with half a cup of mayonnaise. Grill the corn, turning on all sides until slightly charred. While still warm, slather the corn with the mayonnaise mixture. Squeeze lime juice over corn and sprinkle with grated parmesan cheese. You can also add chili powder and chopped cilantro if you want.

Anytime you grill, safety must be a priority. While grilling safety seems like common sense, more than 5,000 grilling fires occur each year. More than 10 people are killed and hundreds injured while grilling annually. The majority of grilling accidents are caused by malfunctioning gas grills, according to the Insurance Information Institute.

With that in mind, below are a few grilling safety tips from the Red Cross.

• Never grill indoors – not in the house, camper, tent, or any enclosed area.

• Always supervise a barbecue grill when in use, and make sure everyone, including the pets, stays away from the grill.

• Keep the grill out in the open, away from the house, deck, tree branches or anything that could catch fire.

• Keep the chef safe by using long-handled tools especially made for cooking on the grill.

• Be ready to close the lid and turn off the grill to cut off the fuel if necessary.

• Keep a fireproof pan under the grill to catch any falling ash or grease.