Police: Have you seen this woman? 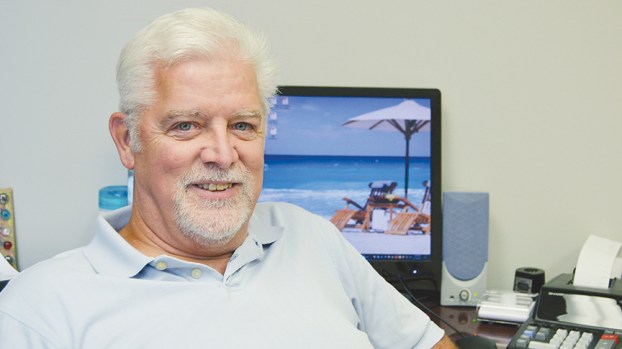 Photo by Donna Campbell/Brookhaven City Clerk Michael Jinks is all smiles as he looks forward to retiring to his home in Gulf Shores, Alabama, after his term ends June 30.

Brookhaven’s city clerk is headed back to the beach.

Mike Jinks will retire at the end of this month, and he’s ready to make the move to Gulf Shores, Alabama, permanently.

A reception will be held for Jinks June 30 in the city boardroom of the Lincoln County Government Complex from 1 to 3 p.m.

Jinks, a native of Birmingham, Alabama, came to Brookhaven in 1971 to attend Whitworth College. At the behest of his pastor and with some help from his church, Jinks enrolled at the college with a double major in theology and math, with plans to go into full-time ministry with the Methodist church. By the time he graduated, it was with a triple major, having added science to the mix.

But before he began ministry officially he felt God was calling him to something else.

Jinks owned his own business and worked in the oil field service as an office manager before taking a job with the city. Most of his jobs have made use of his science and math training. Theology has helped him no matter where he’s been, he said.

He started working for Brookhaven as city bookkeeper in March 1994, and was chosen to be the city’s clerk in a May 2004 special election. He’s the last to be elected, because a law passed in the latest state legislative session says city clerks must now be appointed.

Jinks has a son who runs an internet technology company near Orlando and a daughter who lives in Gulf Shores. He has five grandchildren between the two.

It’s Gulf Shores, where he spends his spare time, that will become his full-time residence.

“I’ve been going there all my life, since I was 2 years old,” Jinks said. “I have a home down there.”

Plus it’s only a couple of miles by land or water to where three of his grandkids are.

It was the plan for Jinks and his wife to retire there together, but she got sick and passed away in 2015.

“She got to enjoy it for a couple of years,” said Jinks, looking at photos of the home they purchased together. “I’m glad for that.”

Since his term as clerk ends June 30 and he no longer has family ties to Brookhaven, he feels this is the right time to pull up stakes and return to the place he’s loved since childhood.

At 64, he’s the oldest person in the city’s administration and the one who’s been there the longest.

Jinks is glad to say he was part of the Linbrook Alliance Board since it began, and served as chairman until his wife fell ill. He was part of securing the property, putting up the infrastructure and getting the spec building put in.

“I’ve been real fortunate to have been on the Linbrook Alliance Board,” he said.

He considers the merging of his office with that of the tax assessor to be a major accomplishment. It has allowed residents of the city and county to receive one tax bill and pay in one location, eliminating a lot of paperwork and confusion for everyone involved.

He’s worked with five mayors and has seen the office upgrade digitally in his tenure. He’s also confident he’s leaving a capable staff to continue in the clerk’s office.

Deputy City Clerk Samantha Melancon has been with the office for slightly less than 10 years. When she completed her necessary certifications eight years ago, Brookhaven became the first city in the state to have more than one certified clerk in office at the same time, Jinks said.

“I have a good person trained and ready to take over,” Jinks said of Melancon, adding that he fully expects her to be the newly-appointed clerk come July 1, because “there’s no better choice.”

Jinks is looking forward to a little fishing and boating with his grandchildren, as well as working in his yard. On his last trip to Gulf Shores he had a greenhouse installed. He plans to continue his passion for grafting camellias there, and to grow a few vegetables, too.