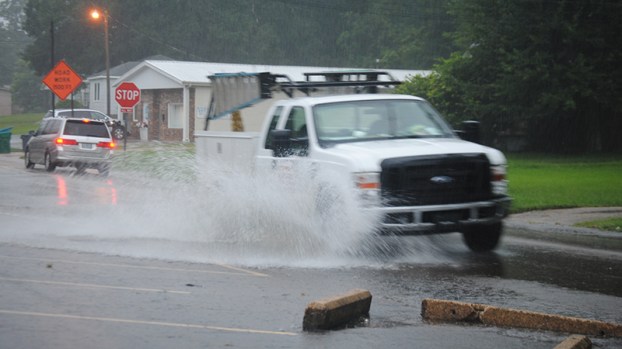 When it rains, it pours — and it floods

Flash flooding Monday caused at least one road in Brookhaven to be closed and slowed down traffic on others.

Rainfall amounts of 2 to 5 inches in short period of time may lead to flash flooding, especially in areas where the ground has been saturated by heavy rain over the past few days, the National Weather Service reported. NWS has predicted that thunderstorms will continue throughout the week.

“We shut down Honey Creek Lane due to flooding,” said Brookhaven Street Department Supervisor Burt Wilson. “It’s the road that takes you to Kid’s Kingdom Park.”

“Right now we have a lot of moisture in the atmosphere,” said Shannon Hefferan, a meteorologist with the National Weather Service. “We have a low pressure system coming up from the Gulf of Mexico that’s giving us a lot of moisture and rain. Areas, especially south of I-20, have been receiving a lot of rain.”

Flash flood warnings were issued throughout the day. Hefferan said the storm was moving slowly, so water had plenty of time to accumulate and cause flooding. NWS reported 1.24 inches of rainfall on Monday.

She said the flooding threat doesn’t look like it will continue into the week, but there are still chances of occasional afternoon showers.

“We will return to some high temperatures again soon, but it will be mainly in the Delta region where they will get heat indexes near 105 degrees,” Hefferan said.

Temperatures for Brookhaven will remain in the lower 90s throughout the week. There is a low pressure system coming from the north that could bring some relief this weekend, she said.

“The system coming from the north won’t give us a big relief, but we may could see temperatures in the mid 80s. We also may see some rain,” Hefferan said.