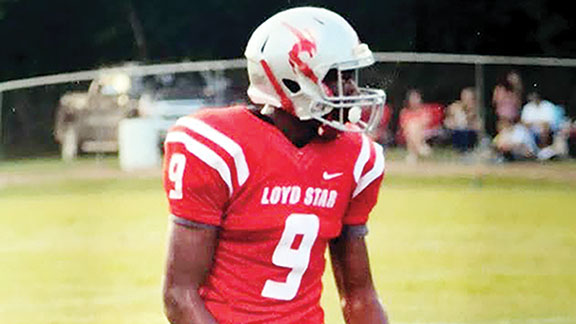 Two scores in just over two minutes late in the second quarter were what the visiting Sacred Heart Crusaders needed to take a 35-14 win over Loyd Star on Friday night.

The Hornet faithful at W.E. “Sambo” Smith Field saw their team tie the game at seven all on a 2-yard touchdown run by Patrick Price with 9:48 remaining in the first half. The TD run came on a 4th and goal and was the fourth straight crack at the goal-line from inside the 5-yard line by the Hornets. Price set the table for his score by getting the ball to the five with a 20-yard scamper on the previous set of downs.

Just 43 seconds later the Hornets took a 14-7 lead on a 31-yard touchdown run by Je’Mario Clay. The junior running back raced untouched through the Sader defense on a perfectly executed fullback dive. Loyd Star kicker Cole Carpenter finished 2-for-2 on PAT kicks and also booted a touchback in his first varsity game.

Sacred Heart took a 15-14 lead with 4:33 left in the first half behind a 12-yard Klein Campbell touchdown run. Campbell, a powerful senior runner, would add another 12-yard scoring run in the second half.

The biggest play of the game came less than 3 minutes later when Crusader quarterback Zach Weatherell hit Joseph Bishop for a 72-yard gain down to the Loyd Star 1-yard line. Campbell then punched in a 1-yard TD run three plays later and Sacred Heart had seized a 21-14 lead and momentum headed into halftime.

Campbell’s third TD of the night came with 57 seconds left in the 3rd quarter and put the visitors from Hattiesburg up two scores. Sacred Heart added a defensive TD late in the game for their final score.

First year head coach Brian Ford pushed his young team to continue to fight until the final whistle. Ford saw plenty that his Hornets could improve on. “You can’t get behind early to a team as good as Sacred Heart and we had some mistakes that really hurt us,” said Ford. “We’re going to get some guys healthy soon and we’ll keep working. This is a young team without a lot of experience and we will continue to improve,” said Ford.

The Hornets are on the road next week as they travel to McLaurin to take on the Tigers for a 7 p.m. kickoff.