Brookhaven School District Board of Trustees candidate is running… 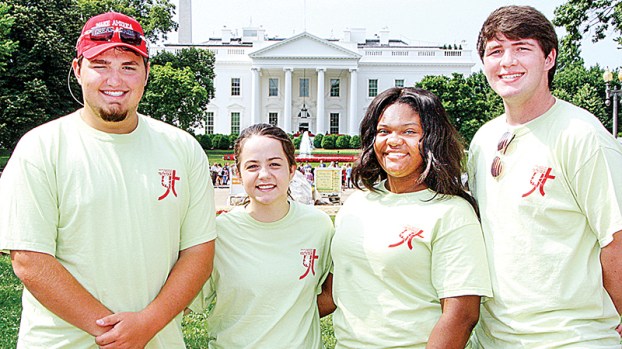 Nick Brumfield spent a week of his summer in the nation’s capital at Cooperative University. It’s an experience that he’ll never forget.

The four students joined 66 others from across the state who represented Magnolia Electric Power. They were chosen through an application and interview process and their participation in Cooperative University. The week-long trip featured visits to the major monuments and memorials, including the World War II Memorial, FDR Memorial, Lincoln Memorial, Jefferson Memorial and the Vietnam Veterans Memorial.

Each year, Magnolia Electric Power sponsors high school students on a tour of Washington D.C. They joined other students representing hundreds of cooperatives from Mississippi and across the United States. The delegates are all like-minded students who are motivated to succeed and become leaders in their communities. This tour is memorable, not only because these young people are able to visit their nation’s capital, but they also make life-long friendships that benefit them well into their adult years.

Brumfield was selected by his junior class to apply for one of the spots on the youth tour. He spent two days in interviews before he was chosen. When he first planned to go, it was for the adventure of a paid trip to Washington,D.C. After the first day, his eyes were opened to the possibility of a political career.

“I think that’s something I want to do,” he said. “The experience was amazing. I’d go back in a heartbeat.”

Brumfield said his visit to Washington D.C. was not only his first visit to the nation’s capital, it was his first time to fly. When he arrived, the only people he knew were Battle, Thompson and Griffin, and he’d only recently met them.

Now he stays in touch with them, and also some of the other students he met during the week.

“As the week progressed, we were pretty much like a family,” he said. “At the end of the week, when we had to leave, we were all crying.”

“Friendships, connections and learning experiences made this trip simply amazing,” Thompson said. “I have been able to connect with people who possess the same ideas and aspirations as me.”

A trip to the Marine Corps War Memorial was one of the first stops on the tour, followed by a trip to The Air Force Memorial on the grounds of Fort Myer near The Pentagon.

After a drive down Massachusetts Avenue, which is known as Embassy Row, the students were taken on a guided tour of the Washington National Cathedral, the second largest cathedral in the U.S. The cathedral has played a vital role in our nation’s history, serving as a grand spiritual center where Americans can unite to worship, pray and mourn.

Later in the week, the students attended the popular Sunset Parade at the Marine Corps War Memorial and enjoyed a performance by the U.S. Marine Forces Reserve Band. While visiting Arlington National Cemetery, the students respectfully watched the changing of the guard and visited the gravesite of President John F. Kennedy.

The students spent a day touring the Smithsonian Museums, including the museums of Air and Space, American History, Natural History and the National Gallery of Art. Other popular events of the tour were a stop by the Newseum, Madame Tussauds Wax Museum and an evening cruise down the Potomac River. The students were also able to watch the Washington Nationals play the Texas Rangers in Nationals Park.

“A truly amazing experience,” Battle said. “The friends I have made are my friends for life.”

Brumfield said the visit to Arlington National Cemetery and the changing of the guard at the Tomb of the Unknown Soldier was a highlight of his trip.

“That was one of the most eye-opening experiences,” he said.

In addition to sightseeing, the students also spent a day on Capitol Hill, which began with a special tour of the U.S. House Floor hosted by Rep. Gregg Harper. While in the Capitol building, the students enjoyed a panoramic view of Washington, D.C., from the speaker’s balcony. After the tour, Magnolia Electric Power representatives joined a smaller group to visit with Rep. Harper in his D.C., office. The congressman spoke to the group about what it takes to be a leader and the importance of setting goals and striving to achieve them. During the visit to Capitol Hill, students also had the opportunity to meet with Sen. Roger Wicker.

“I’ve never been so happy to be so exhausted. This week, we lived D.C., to its fullest, and it has been such a blast,” Griffin said.

“At Magnolia Electric Power, we are always glad to be a part of the Youth Leadership Program. This program gives students an opportunity to learn about the cooperative business model and our nation’s history,” General Manager Darrell Smith said. “The program also instills leadership in the students and impresses upon them the importance of participating in their government.”

Brumfield said he wasn’t an overly outgoing student before he participated in the youth program. He learned so much in such a small amount of time and it has stuck with him.

“It changed me for the better,” he said.