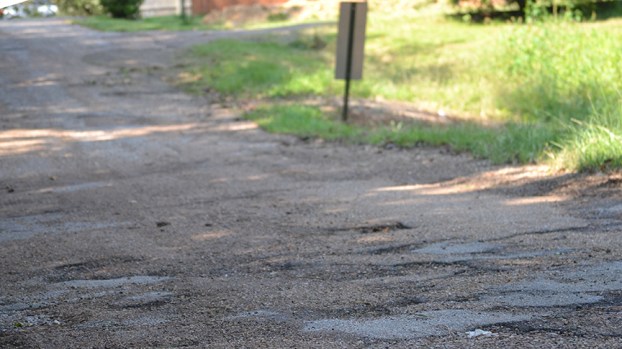 Photo by Donna Campbell/Falana McDaniel recently asked the Brookhaven Board of Aldermen to do something about roads — like Mason Road — in the Brignal community.

The founder of a mentoring program for youth in the area has ideas for improving the city.

Falana McDaniel, who started Rising S.T.A.R.S. for Christ in 2014, attended a recent meeting of the Brookhaven Board of Aldermen to ask what the community — specifically the Brignal community — can do to get better roads and recreational venues for children in that neighborhood.

“This evening I want to talk about making Brookhaven beautiful again,” she said. “I’m going to start with the Brignal community because that’s where I’m from and my mom lives there.”

McDaniel has noted the deterioration in the roads there when she visits her mother.

“On my way to her house a couple of times, I’ve run into a couple of potholes,” she said.

An educator, McDaniel researched the problem and talked to other residents in the area.

“On Dixie Road, a couple of residents were telling me the road is sinking in. They were concerned. My concern is, is this issue being addressed,” she said.

“The biggest part of Dixie Road is it just needs to be paved,” he said. “That’s always been an issue with that. We don’t have it in the budget but we’re talking about doing a bond to do some more paving. So until that happens, I can’t tell you when that will be done.”

Cameron was the alderman for Ward 1 for 16 years. After a four-year break, he was recently re-elected.

“I’ve looked at Mason Road, and I know exactly what you’re talking about. Since I’ve been back in office, it’s in bad shape,” he said.

“It puts wear and tear on the residents’ cars,” she said.

“There is a little dip where there’s pot holes everywhere. You have to dodge them,” he said.

Cameron and Public Works Director Keith Lewis rode through the Brignal community and the rest of Ward 1 about three weeks ago.

“We picked some streets that need to be attended to, just like you’re talking about on Mason Road. But you know we can’t do them all at one time,” he said.

McDaniel said she understood, but added that it doesn’t appear to her that all wards get the same attention.

The paving plan that the city recently completed involved 77 streets for a total cost of over $3 million.

At a public hearing last month, prior to approving the budget, Mayor Joe Cox broke down the amount spent on the roads by wards:

McDaniel, a mentor for young people, said she’s also concerned that there are no recreational opportunities provided for the city in areas such as Brignal.

“I see youth playing basketball in the streets,” she said. “That’s a concern of mine.”

She pointed out that the city plans to spend $85,000 for an animal shelter.

“(Ward 5 Alderman) Fletcher (Grice) mentioned priorities is what y’all look at. What that told me is that you guys care more about animals than our youth,” she said. “So I’m going to close with this, and ask you to search your hearts. Why are you here? Is it for the whole community?”

While the mayor thanked McDaniel for sharing her concerns, the board did not discuss her requests at the meeting.

As for the animal shelter, Cox noted after the meeting that the city is mandated by statute to maintain a dog pound.

The current shelter sits at the end of a dirt road at the city dump. Two rows of dog runs, about 18 total, are covered with a sheet-metal roof. One wall is closed in with sheet metal.

The shelter sees about 300 dogs a year.

“We obviously need a new facility,” he said.