Coach looking to boost retail economy in Brookhaven and… 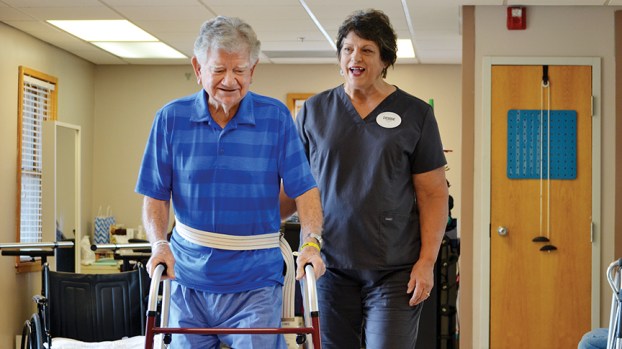 Photo by Donna Campbell/Carey Beeson walks with the aid of a walker during a therapy session with therapist Debbie Ratcliff on Friday.

Fighting back against West Nile

A mosquito bite could have killed Carey Beeson. The Brookhaven man is really glad it didn’t.

Beeson lives with Irene, his bride of 12 years, at the home he’s had on Mary Street since the ‘60s. He’s currently a resident at Countrybrook Living Center in Brookhaven as he recuperates from a case of the West Nile virus, only the second confirmed in Lincoln County this year. He’s the lone case in Brookhaven.

So far this year, the Mississippi State Department of Health has confirmed 51 cases of West Nile in the state, including two people who died — one in Forrest County and the other in Humphreys County. In July 2015, Brookhaven Fire Department Capt. Justin Rippy, 38, lost a two-year battle after being infected with West Nile Virus. Rippy was also a captain with Hog Chain Volunteer Fire Department.

Beeson doesn’t remember getting bitten by a mosquito.

West Nile is one of four mosquito-borne illnesses in the state, according to the Mississippi Department of Health. The others are St. Louis encephalitis, Chikungunya virus and Eastern Equine encephalitis. These illnesses affect birds, animals and humans, causing flu-like symptoms in people who are bitten by infected mosquitoes. Occasionally, illnesses can be severe, leading to meningitis or encephalitis.

The effects of Beeson’s run-in with the insect began to show Aug. 12. Beeson, a retired appliance repairman, hopped in his pickup to run an errand. He came home for lunch and his wife noticed his hands had a slight tremor. She recalled that two weeks earlier he had some tremors also.

The 81-year-old went to the restroom a few times and she had to help him, which was unusual.

“The last time he went he couldn’t walk. I couldn’t help him. He couldn’t even shuffle his feet,” she said.

About 8 p.m. that night, he had two bouts of nausea and vomited several times. They sat him into a chair and she called 911. The ambulance rushed him to King’s Daughters Medical Center.

Doctors ordered X-rays, an electrocardiogram, CT scans and the like. It was all negative.

The nurses tried to get him to walk, but he couldn’t take a step, his daughter, Joy Moak, said.

By morning, he was no longer responsive. When his younger daughter, Gale Bates, arrived, he couldn’t talk.

He had a lumbar puncture — a spinal tap — that Sunday night. By Monday, his eyes were glazed over and he was running a fever. Medication wasn’t bringing it down.

“They suggested that it could be West Nile and they were pretty sure it was meningitis,” Moak said.

The spinal tap confirmed that it was viral meningitis, which is side effect of the West Nile virus.

They began to treat him with massive doses of antibiotics and steroids. They covered him for a few days with a cooling blanket for the fever.

The last thing Beeson remembers is getting out of his truck that Saturday.

“I don’t remember nothing,” he said.

Once he was diagnosed, he was transferred to Countrybrook Living Center in Brookhaven Aug. 23.

“Daddy lost the ability to walk, talk and feed himself,” Moak said. “He was totally incapacitated.”

Prior to the mosquito bite, Beeson stayed active and cut his own grass. It’s been hard for him to be slowed down by something as tiny as a bug. He’s working hard to recuperate and has daily sessions with a therapist for physical, occupational and speech therapy.

“They say that I’m doing great and everything and if I keep it up I might be able to go home the first of the week,” he said.

He’s had one excursion to eat at Kannu’s Restaurant in Hazlehurst for seafood. His daughters plan to take him to church Sunday night at Bethel Temple Pentecostal Church in Brookhaven.

“We give God praise for the prayers that were sent up for Daddy,” Moak said.

Beeson and his family encourage people in Lincoln County to avoid mosquitos, but they realize that’s nearly impossible in southwest Mississippi.

Instead, they recommend that individuals should treat any change in speech, movement and health for themselves or others seriously.

That’s what Moak and Bates believe saved their daddy’s life.

“If there’s anything unusual, it’s better to be safe than sorry. The sooner you catch it, the better,” Moak said. “I think that if we had even waited until Monday, it would have been a different outcome.”

The Mississippi Department of Health advises that individuals should use a recommended mosquito repellent; cover arms and legs with long, light-colored clothing; avoid mosquito-prone areas in the mornings and evenings when activity is highest and remove sources of standing water around your home where mosquitoes can breed.