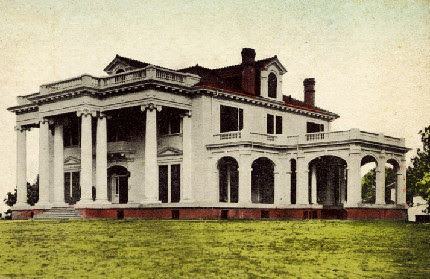 Located on Storm Avenue, Edgewood is "perhaps Brookhaven's most storied mansion." The home was completed in 1912 and can be seen in this post card from 80 to 100 years ago. This post card was featured on Molly Carruth Mandel's history blog "Sippiana Succotash."

Grandson of ‘Indian Doctor’ to talk about Edgewood

The house that sits at 412 Storm Ave. has so much history, the Lincoln County Historical and Genealogical Society needs two months to cover just a part of it.

It’s been called Edgewood, Butterfield, the Lovell House and even the home of the “Indian Doctor.”

That physician — Dr. Harry Hannon — and his contributions to the mansion’s grand history will be the topic of discussion Thursday at 6:30 p.m. at the Jimmy Furlow Senior Citizen Center. Dr. Hannon’s oldest grandson, Mike Odom, is the featured speaker. The public is invited to attend the free event.

In October, the mansion’s current owner will speak about the renovations currently underway there.

Stacie Cross will be the featured speaker Oct. 26, just before Halloween. She’ll share about the restoration she and her husband are doing along with stories about the history she has uncovered, which could include a few ghost stories as well as some information about Hannon.

The doctor was born Sept. 29, 1896, in New York. He came to Brookhaven in the 1930s, making his home in the Butterfield/Edgewood Mansion on Storm Avenue. According to local folklore, Hannon was believed to be an “Indian doctor” who practiced holistic medicine and operated a medical clinic out of his home. He also created an ointment called Hannon’s Rub that many swore had “magical healing powers,” said LCHGS President Tammie Brewer. People would travel from miles around to visit the doctor and purchase his miraculous salve, she said.

“We are very excited to have Mr. Odom come and speak with us about his grandfather,” Brewer said. “The public knows very little about Dr. Hannon and the information that we do have is purely speculative.”

Controversy and litigation would surround Hannon regarding his ethnicity and whether he was licensed to practice medicine. He was vindicated before his death in 1949 at the age of 52. His obituary on Find-A-Grave listed survivors as his wife, Christine Mason Hannon, and his four children — Dorothy, Robert, Harry and Sarah.

Odom, the son of Hannon’s daughter, Dorothy, will dispel many of the rumors about his grandfather and give some insight on his life and that of his children, Brewer said.

Odom, a retired colonel, now owns and operates two Rocky Mountain Chocolate Factory stores in Ridgeland and Pearl. He grew up in Pikeville, Kentucky, and was one of 45 accepted to NYU’s School of the Arts Acting program. He has performed off-broadway, and on television and in commercials and industrial films before joining the Air Force as a second lieutenant.

Odom served in the Bosnian and Iraq wars and at one time was the spokesperson for NATO in Bosnia. He was also the public affairs officer for the Hurricane Hunters at Keesler Air Force Base in Biloxi. His last station was at the Pentagon where he served as an adviser to the chief of public affairs for the United States Air Force.

Those who attend are asked to bring items for show-and-tell if they have them.

“We always encourage the public to bring memorabilia or photos that they would like to share to these meetings,” Brewer said.

Refreshments will be served following the program that typically lasts one hour. For more information, contact Sue Dorman at 601-833-7665.