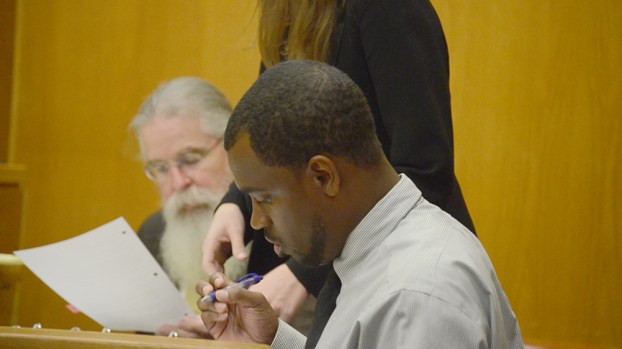 Photo by Matt Rushing/Defendant Jamaal Brown looks over his notes as his attorneys — Tom Fortner and an assistant — examine trial documents.

Brown, if convicted, could face a life sentence for the death of a 13-month-old child.

Dr. Scott Benton was the final expert witness to take the stand Tuesday. He is a professor of pediatrics at University of Mississippi Medical Center in Jackson.

He is also the medical director at Children’s Safe Center, which provides clinical evaluation for children who are victims of abuse.

“I see children every day and try to determine whether they’ve been abused or not,” said Benton. “Most abuse tends to be around the head area.”

Benton saw Heath the night he died in the pediatric intensive care unit at UMMC. After the child was pronounced dead, Benton photographed the particular areas of the child’s body showing trauma.

The printed images were shown to the jury.

Benton pointed to abrasions to Heath’s forehead and reviewed pictures of hemorrhages on the back of the child’s retina.

According to Benton, there were injuries and contusions on both sides of Heath’s head. He also had bruises in his mouth and abrasions on his spine, Benton said.

Brown told authorities that Heath’s injuries occurred when he slipped and hit his head on the toilet, and then fell forward on his face.

Benton said the damage to Heath’s body “is far more extensive inside his body than a child would receive from a fall.” He said the child’s death was caused by “high-force injuries, severe swelling and brain injuries.”

Defense attorney Tom Fortner stressed to the jury Brown’s cooperation with investigators. He said the defendant even led them through his house where the event happened. He also said that Brown answered all questions from Dr. Benton while at the hospital.

The trial continues today, with testimonies set to begin at 8:30 a.m.