Defendant in capital murder trial: ‘I loved him with… 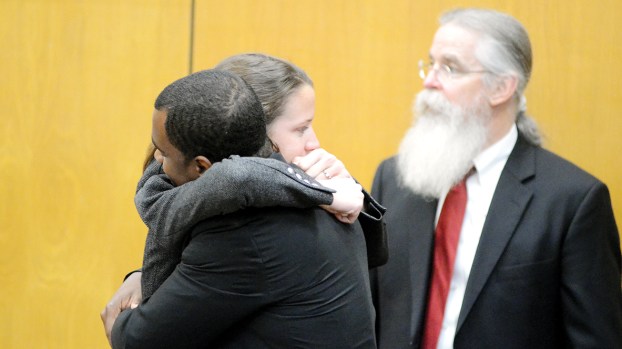 Photo by Matt Rushing/Jamaal Brown of Brookhaven hugs Valerie Moss, one of his defense attorneys, after a Lincoln County jury found him not guilty of capital murder. Attorney Tom Fortner looks on.

A jury Friday found Jamaal Brown not guilty of murder in the 2014 death of his fiance’s 13-month-old son, Preston Heath.

Brown was crying after the verdict was read and then celebrated in the courtroom with the defense team and his family.

Brown was called to the stand Thursday, giving his account of that January morning — not long after Heath and his mother, Erin Reynolds — moved into his home in Brookhaven.

On Friday, the prosecution began the day with its closing statements.

“For 408 days, this child didn’t have any injuries. On the 409th day of his life, he would have significant injuries that ultimately ended his life on this earth,” District Attorney Dee Bates said.

He showed the jury pictures of Heath’s body, which documented abrasions and bruising surrounding the toddler’s head. He also showed autopsy photos taken that show the inside of Heath’s body as he pointed out  specific areas where injuries occurred.

“Jamaal said he was placing stuff on a towel rack and he could see Heath in his peripheral vision and then he hears two sounds,” he said. “The injuries that Heath sustained can’t be accounted for. He has injuries on the backside of his head, above his left ear and right ear. He also has abrasions and bruising to the back of his head and chin.”

Bates said that doctors acknowledged that there were mutliple spots of contact to the child, but that is contradicted by Brown’s claim he only heard two sounds when Heath fell.

“There were contact points to the front, sides and back of the child’s head. So much contact that his brain shifted to where it caused him to have an inability to breathe, which led to his death,” said Bates.

He also showed the jury photos of retinal hemorrhaging in Heath’s eyes.

“All of these injuries killed this child on his 411th day on this earth and you just can’t explain these injuries.” said Bates. “Ladies and gentlemen of the jury, Jamaal lost it and hurt this child and that’s why he died in Jackson.”

With Bates’ argument ended, the defense stood to decry his statements.

Defense attorney Tom Fortner explained to the jury about the rule of law. He said that they must know without a reasonable doubt that Brown committed this crime. If not, then he’s not guilty of capital murder, he said.

“There is never any mention that Jamaal physically abused Heath while he was alive,” Fortner said. “They are trying to tell you he did this with no proof at all. There is nothing Jamaal has done that would indicate that he has ever considered such behavior.”

Fortner said that Brown loved Heath — so much that Brown called Heath his son, even though the child was not biologically his. Heath’s mother, Erin Reynolds, was pregnant with the boy when she was introduced to Brown by a mutual friend. At the time of her son’s death, Reynolds was working as a nurse in the neonatal intensive care unit at University of Mississippi Medical Center.

Heath was transferred to UMMC soon after Brown brought the boy to King’s Daughters Medical Center where he worked as a nurse.

“We’ve had witnesses this week tell you that Brown is a truthful, peaceful person and that he takes care of his four children,” said Fortner. “Did he treat Preston as his own son? The answer is yes.”

The defense argued that some of the bruises could have been caused by medical personnel trying to save Heath’s life. They also discredited Benton’s story, saying that he presumed to know what happened before Heath died.

Fortner said that Bates tried unsuccessfully to push Brown to an outburst in the courtroom to prove his client had a bad temper. It didn’t work.

The defense also showed video of Brown leading investigators through his house.

“There’s nothing about his actions that indicate he was doing something wrong,” Fortner said. “Sometimes we can’t explain tragedies and sometimes tragedies aren’t someone’s fault.”

After the defense finished, the prosecution concluded the closing arguments.

“He has never shed a tear throughout this whole trial and he supposedly loved this child,” she said. “Brown said he heard two impacts and that’s not reasonable. The only thing that could have happened is that Brown inflicted these injuries.”

After closing arguments, the jury was called into deliberation. They returned the verdict shortly before 7 p.m.