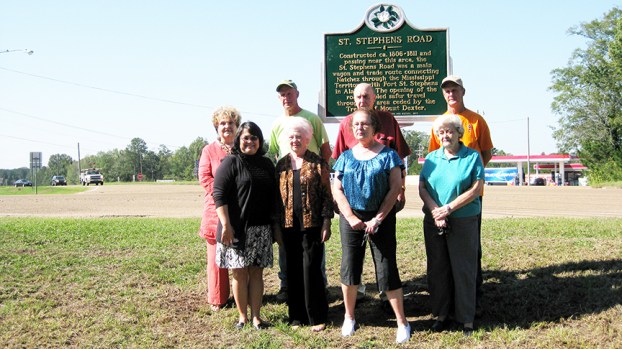 Q: Why does St. Stephens Road have a marker from the Mississippi Department of Archives and History?

A: St. Stephens Road was once the main wagon and trade route connecting the Mississippi territorial capital at Natchez with Fort St. Stephens in Alabama. Planning for the road dates to January 1809, when the Territorial General Assembly appointed three commissioners “to employ a fit person to open a road from Pearl river, where the present Choctaw boundary line crosses the same, the nearest and best way to the Chickasawhay river.”

The large, green and silver freestanding marker was unveiled Sept. 29, 2011 as part of the state Department of Archives and History’s Historical Marker program, which is used to recognize significant people, places and events across Mississippi.

The marker, located at the intersection of Dale Trail and Hwy. 51, was of the first projects completed by the Lincoln County Historical and Genealogical Society.

“This was the first marker the historical society sponsored,” said President Tammie Brewer. “It was a project Dr. Jack Tindall wanted us to do, to give recognition to the route that came through this area.”

Unfortunately, the retired dentist, who was instrumental in forming the historical society, wasn’t able to attend the unveiling. The 97-year-old World War II veteran died Oct. 7, a week after the marker ceremony.

“Dr. Jack Tindall is credited with having started the Lincoln County Historical Society,” Brewer said. “He was in his 90s at the time and decided we needed a historical group to help preserve history in our area. He wrote a book, ‘The early history of Lincoln County.’ Dr. Tindall donated the proceeds of the book to help us open up the museum.”

“One was to start a museum and the other was to get a historical marker for St. Stephens Road,” she said.

Brewer said the thoroughfare has a huge significance to Brookhaven.

“St. Stephens Road was a route from Fort St. Stephens in Alabama and went to Natchez. It ran east and west. It was a main thoroughfare back in the early 1800s and is responsible for many of the settlements that are still here today,” she said. “The road ran the same route as Hwy. 84 runs today in our area. A stage coach stop was located near the Old Brook settlement, down First Street, and is probably one of the reasons that Brookhaven exists today. People would stop on their way through to rest their oxen or horses and eventually many stayed.”

According to the official marker, St. Stephens Road was constructed between 1806 and 1811 and was a main wagon and trade route connecting Natchez through the Mississippi Territory with Fort St. Stephens in Alabama.

“The opening of the road enabled safer travel through this area ceded by the Treaty of Mount Dexter,” it reads.

The LCHGS has partnered with the City of Brookhaven to sponsor several more historical markers including Rosehill Cemetery, Old Brook Settlement, Pearlhaven, the Coffee Pot and also a marker unveiled earlier this month to honor the late Dr. Albert L. Lott.