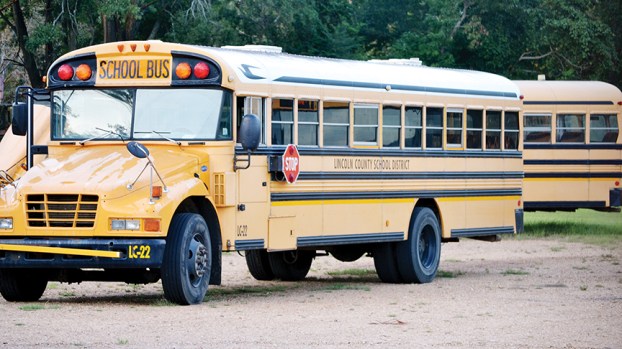 Where do you draw the line? Determination of Lincoln County school district boundaries

Some students who attend Enterprise Attendance Center in the lower east corner of Lincoln County live less than a mile from Wesson’s school.

Though they’re in Lincoln County School District, according to maps drawn up decades ago, they must travel through Brookhaven to the other end of the county about 20 miles away for their education.

The color-coded map on the LCSD’s website shows the oddly drawn lines that put Enterprise’s district on the top and bottom of the county, divided by the Brookhaven School District, which stretches from the city all the way to the Lawrence County line.

The district lines have caused problems for students recently who attended Loyd Star Attendance Center most of their lives but should have attended schools in Brookhaven.

The residency of the students, who were athletes, was called into question by the Mississippi High School Athletic Association.

A ruling in the case has not been made public.

Lincoln County School Superintendent Mickey Myers said the district lines were drawn to allow for integration of schools when the U.S. Supreme Court declared that segregated schools were unconstitutional in 1954.

Myers said the lines were drawn at the direction of the Department of Justice.

“You look at a map (and think) why did they do that? I’m sure there were a lot of political factors that went into drawing those lines. We just have to abide with them,” he said. “It’s incredible. You have students who could walk to Wesson school.”

The lines create issues with bus transportation as well because some routes must start at 6 a.m. “which is a concern,” he said. “That means a child can be riding the bus close to four hours a day. That’s a drain on them physically.”

He said the DOJ was arbitrary with the district lines without considering the impact on the students.

“There are neighbors who attend three different schools,” he said.

He said that bit of red tape wasn’t completed in the cases of the students who were attending a Lincoln County school without meeting the residency requirement.

School administrators ask for proof of residency during enrollment, but the district doesn’t have the manpower to physically verify the information in each case.

He said it’s becoming more difficult to police because of divorces and remarriages, and children who go to live with grandparents or other family members.

“Some districts a little more affluent than us have personnel or a security agency and verify residency,” he said.

Some students who live in the Brookhaven School District attend Lincoln County Schools by choice, without following the proper protocol, he said.

The Brookhaven School Board voted in 2002 to change its transfer policy so that no new transfers would be allowed.

At the time, 140 students were transferring out of the district. Twenty-three of those were teachers’ children. Those students were allowed to continue where they were until graduation.

“I think the board spent a lot of time wrestling with what was the best decision,” board secretary Prentiss Smith said at the 2002 meeting. “It’s hard to find a reason for a student to leave this school district.”

Brookhaven board members argued that the district lost $3,500 per student when a student transfered out of the district that year. Smith also pointed out that all but four of the students who transferred were white and that could affect the district’s racial makeup.

The policy closed the door for students to leave Brookhaven schools, but kept it open for those who wanted to come in.

“We will gladly accept all students into our district at all times,” he said. “This in no way is intended to defer students.”

According to current policy, Brookhaven will allow students to transfer out of the district if a parent is an employee of another district or a non-certified employee of another district that is at least 30 miles from boundaries of the district. They will also allow transfer of any student with medical, physical, emotional or educational needs that can’t be met. The latter will be considered on a student-by-student basis with a written petition, according to the policy.

Lincoln County School Board President Kay Coons said that parents who request their children to move to another attendance center within the district are usually granted the transfer, “if the principal accepts them. Like, if they live in Enterprise and want to go to Bogue Chitto, we usually give them a district transfer.”

She said MHSAA recently looked into residency of students within the district.

“You have to be a resident in whatever school (district) you’re playing sports in,” she said.

Some of those in question lived in the Brookhaven district.

“The children lived in the Brookhaven district and turned them in I supposed,” she said. “If they’d asked for a transfer and Brookhaven gave them a transfer, they would have had to sit out (of sports) a year and and that didn’t happen.”

Myers told The Daily Leader Sept. 28 that no students in the district have been transferred due to residency issues.

He said then the board will look into eligibility of students at all four attendance centers, but will likely not make any changes during the school year. He said students who may be in the Brookhaven School District could lose credits because Brookhaven is on a four-block schedule while county schools are on a seven-period day.

Myers said Friday that Lincoln County school officials have scheduled meetings with other districts to discuss the transfer issue “to share information and see how we can correct this. Obviously, we’ve got to comply with the law.”

Coon said the lines were drawn following integration so that the districts would be “racially balanced as well as it could be. We can’t do anything about it, because when integration came along that’s the way it was drawn.”

She said that parents should follow the protocol that is in place concerning residency and transfers.

“Anytime you give an address that’s not your residence, people take a chance on getting caught up in the MHSAA,” she said. “Someone will turn you in.” 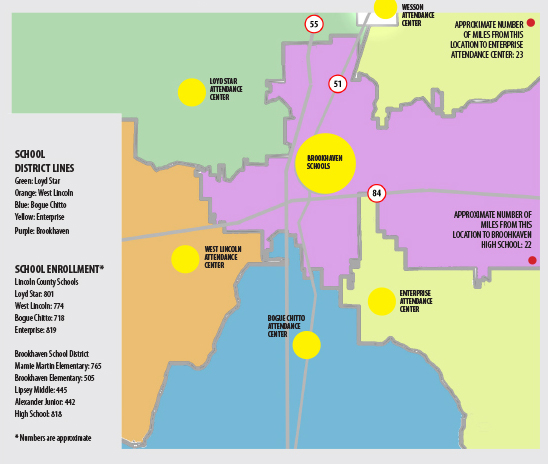 A map of school lines for Brookhaven and Lincoln County schools shows the irregularities in each district.