One driver injured in Hwy. 84 collision in Brookhaven 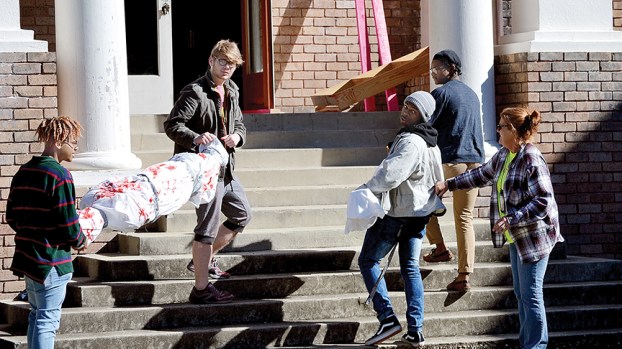 Photo by Donna Campbell/Students from Mississippi School of the Arts move some of the props into Cooper Hall for the weekend’s ArtOberfest. Tickets are $5 for the walk-through haunted house, which will be open Friday and Saturday from 7-10 p.m. and Tuesday from 7-9 p.m. Pictured are, from left: MSA seniors Chrystian Butler, Jacob Graves, Tyler Ferrell and Jared Smith and MSA Director of Maintenance Sudie Palomarez.

Even without clowns this year, organizers of the Mississippi School of the Arts Artoberfest Haunted House promise a frightfully good time to those who dare to enter Cooper Hall.

Built in 1914, the abandoned, dark building becomes a showcase for the imaginative students at MSA. It’s the perfect setting for whatever scary concept the students choose, said Sudie Palomarez, the director of maintenance for the school.

With Palomarez as sponsor for the past five years, the students have transformed Cooper Hall into historic downtown New Orleans, a haunted carnival, a horror-filled Home Seekers Paradise and an insane asylum.

This Halloween season they’re going all out, bringing Area 51 to Brookhaven. According to conspiracy theorists, the US Air Force facility in the Nevada desert is a research site for UFO crews and other unidentified governmentally-denied phenomenon. In MSA’s version of Area 51, they’ll recreate government experimentation on humans, Palomarez said.

The students — juniors and seniors from Lincoln County and other areas of the state — brainstorm ideas then vote on their favorite. About 60 to 65 students volunteer to be involved in the project, working on it from Sept. 1 through closing night. They receive community service hours for their time and valuable experience for their participation.

Cooper Hall is divided into 11 rooms, with five to 10 students in charge of creating a story that fits the theme of the house. Palomarez said there will be a Russian sleep experiment, a Siamese twin separation, a toxic waste disposal and some brainwashing.

“You have to be looking to see everything,” she said.

Palomarez promises there won’t be any clown experimentation.

The entire walk-through, led by tour guides, takes about 10 minutes.

There are a lot of jump scares within the passageways so those with heart conditions be warned. It’s also not a good event for young children, she said.

“There’s a lot of weird stuff,” she said. “You feel real awkward and weird when you go through it.”

Tickets are $5 for one visit and $3 for repeat visits on the same night. The walk-through is recommended for ages 10 and up.

“We have several groups every year that will go through two or three times,” she said. “These are very detail-oriented kids. There’s details you might not see the first time.”

The money raised from the haunted house is used to help various children’s charities.

“They like to help kids so we raise money for Christmas presents,” she said.

Tyler Ferrell, a senior from Jackson, was involved in last year’s haunted asylum. It was his first time to see the haunted house, but it won’t be his last. He’s involved in this production, but plans to come visit in years to come to see how his room rates against future students’ rooms.

“It’s definitely something we’ll come back to,” he said.

“Every year, we get better,” Palomarez said.