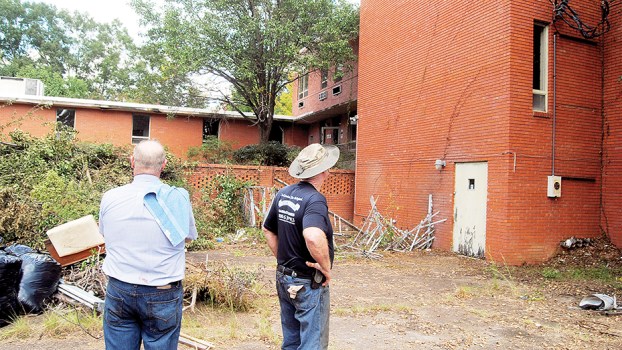 Photo by Matt Rushing/Dexter Pentecostal Church purchased the old hospital on North Jackson and West Congress Streets through the Lincoln County tax sale. They are working to clean up the property and make the facility usable again. Pictured: Jeremy Barber and Thomas Stephens check the progress of the landscape cleanup.

Work on the old hospital on the corner of North Jackson and West Congress Street continues, despite rumors of it being shut down due to asbestos.

In late September, Dexter Pentecostal Church in Tylertown received the property from Railroad Investments after paying back taxes that had been delinquent since 2014.

“We haven’t been shut down,” said Jerry Terrell, a representative of Dexter Pentecostal Church. “We’ve really done most of the work we can do on the exterior for now. We’re just waiting on the interior work.”

The Department of Environmental Quality in Jackson stopped by the former hospital three weeks ago to talk to Terrell and church workers to address any issues concerning asbestos.

“They told us to keep doing what we’re doing. They just don’t want us dislodging any material and we can’t remove any substance that’s not already loose because of it containing asbestos,” said Terrell.

Some of the flooring, walls and ceiling are believed to have asbestos in it.

Because of its fiber strength and heat resistance asbestos has been used in a variety of building construction materials for insulation and as a fire retardant, according to the Environmental Protection Agency. Asbestos has also been used in a wide range of manufactured goods, mostly in building materials — roofing shingles, ceiling and floor tiles, paper products and asbestos cement products. Asbestos may be found in attic and wall insulation produced containing vermiculite.

On its website, the EPA says asbestos that is in good condition and left undisturbed is unlikely to present a health risk. The risks from asbestos occur when it is damaged or disturbed where asbestos fibers become airborne and can be inhaled. Managing asbestos in place and maintaining it in good repair is often the best approach, according to EPA.gov.

Terrell said they are talking with businesses now in Brookhaven to determine the best course of action for asbestos removal.

“It’s going to be a slow process, but we’re going to have an asbestos abatement company help us remove it so we can proceed in restoring the hospital,” Terrell said. “I’m meeting with a company in Brookhaven on Monday to discuss options and have a plan to move this thing forward.”

As for now, Terrell said they plan to replace the exterior doors to secure the building. They will also be replacing broken windows.

The hospital was built in 1922 by the Willing Hearts Circle as an upgrade to the original hospital on Chickasaw Street. Over the years, King’s Daughters Medical Center continued to grow, and it eventually moved to KDMC’s location on Hwy. 51 in 1964.

The building had fallen into disrepair and the lot was overgrown for years. Church members made a huge improvement by cleaning the lot.

Cecil Britt, who lives on Josephine Street, thinks the renovations to hospital could be a game changer for the neighborhood.

“Personally, I think it will raise some of the property value in the area and make the area more safe,” Britt said. “Having lived close to the old hospital for over 20 years, it makes me feel more safe instead of there being an old run down building.”

Dexter Pentecostal Church will host a fish fry in front of the hospital Wednesday from 10 a.m. to 1 p.m. to raise funds for renovations. Terrell said the church is looking for business partners to come on board with their project.

Terrell said renovations could cost anywhere from hundreds of thousands of dollars to millions.

“This is a community project. I feel like the Lord gave us this property not to let us fail. This is going to be a slow process, but we’re going to make it happen,” said Terrell. “I promise you we will make Brookhaven proud.”