Looking for a few good men and women —… 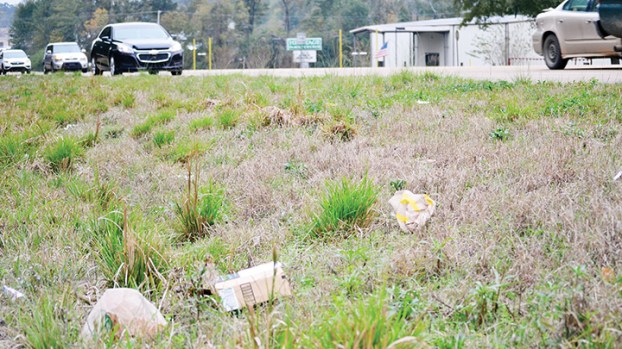 Photo by Donna Campbell/Cars blow past fast food wrappers and other trash Wednesday on Hwy. 51. Brookhaven aldermen Tuesday voted to increase the fine for first-time littering offenses from $50 to $250.

Litter fines on the rise in Brookhaven

Motorists should think twice before tossing that burger wrapper out a car window.

After a 5-2 vote by the Brookhaven Board of Aldermen Tuesday night, that value meal could end up costing mega bucks if the containers aren’t disposed of properly.

Aldermen voted to raise the first-time fine for littering from $50 to $250. Ward 2 Alderman Shannon Moore and Ward 6 Alderwoman Shelley Harrigill both voted against the move because they felt it was too big of a jump in the fine amount.

Ward 4 Alderman Jason Snider made the motion, which was seconded by Alderwoman-at-Large Karen Sullivan.

Snider said he sees trash routinely along city roads. Intersections seem to be ashtrays for drivers, who toss their butts out the windows at red lights, he said.

Residents regularly can be seen picking up trash in front of their homes and King’s Daughters Medical Center employees clean the litter in front of the hospital’s clinics, he said.

Snider thinks the fine needs to be higher to curb the litter problem in the city.

“I love our town and I am proud to show it off, “ he said. “We have a lot of positive things going on but it takes a community to keep us moving forward,  from our schools, to the private and the public sector.”

He is asking residents to pitch in and take pride in private and public properties.

“To keep the yards well-manicured and picked up, this takes a team,” he said. “If someone throws out garbage on the side of the road it looks bad on everyone and someone has to clean it up whether that is a resident or city and county employees.

“So I would like to encourage people, if they have trash in their car, wait until they get home to throw the trash away or find a garbage can at a gas station. If you see trash, pick it up. It doesn’t take but a couple of seconds to do such a small thing that goes a long way. We have a great community and it takes all of us to keep Brookhaven beautiful.”

City law says that it’s unlawful for any person to “drop, throw or deposit upon any street, sidewalk or right-of-way, any object, article or substance.” Previously, the fine for that would be $50 for the first offense, $100 for the second and $150 for each offense thereafter.

After the majority vote, the fine is one set cost — $250 for each offense.

Moore doesn’t think the one fine is a good idea.

“I’m against littering by all means, but $250 for a first-time offense is too much,” he said.

Harrigill agreed with Moore. She wants to see a range of amounts so the judge can have some leeway in assessing a fine. It should be at the judge’s discretion of what fine to levy, she said.

While she is OK with an increase in the fine, she felt $250 was too much.

“I was in favor of raising the minimum for more than $50, but I think it should’ve been raised to maybe $100 or $150 at least to make it worthwhile from an enforcement side,” Harrigill said.

That would have given a judge a chance to consider the factors involved in the offense that was committed and set a fine accordingly, she said.

You asked: Will I pay late fees if my vehicle tag was due this week?

Board member uses slur to refer to students

Vietnam veteran: ‘I did nothing more than millions’ of others

This Memorial Day, remember them a different way

IHL Board intends universities to reopen in fall