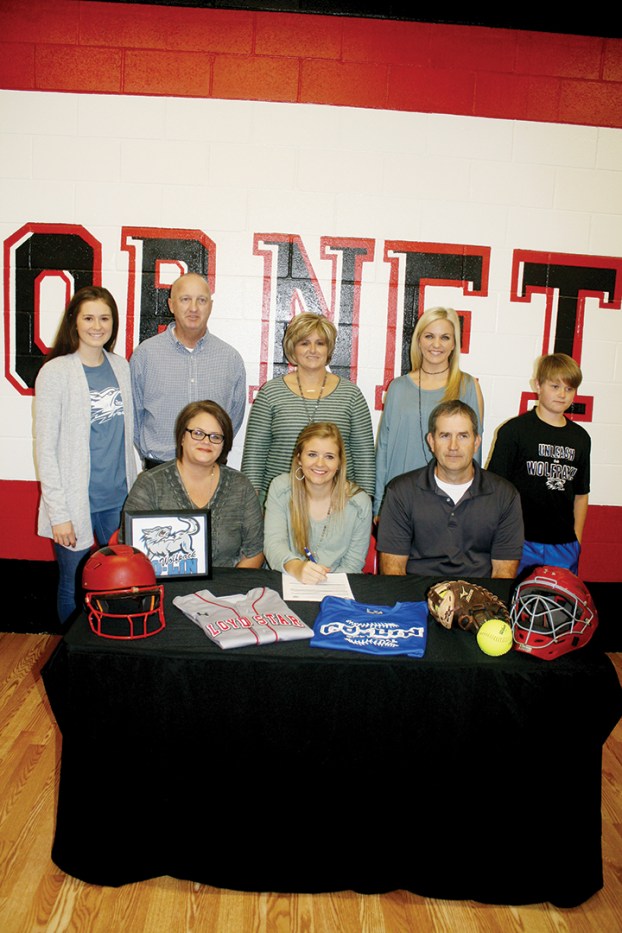 It was a big day.

All the attention was on the softball team, and even the television news had sent a cameraman down to Loyd Star to get some footage of practice. It was Marley Poole’s time to shine.

Instead she collided with the third baseman chasing a fly ball and nearly bit her tongue off.

“The cameraman got me sitting on the ground with everybody around me, blood coming out of my mouth,” said Poole, an 18-year-old senior Hornet.

Poole’s pride was hurt, but her tongue got better, and so did her softball game. The tough-girl catcher’s abilities have progressed enough through the years that Friday morning she signed a scholarship to play for Copiah-Lincoln Community College in 2018, and this time she was sitting upright when everybody gathered around her, the pain replaced by smiles.

“I’m excited to play for Co-Lin,” said Poole, who also plays basketball at Loyd Star. “I like that they’re close to home and some of my former teammates from high school are playing there.”

Poole will bring the Wolfpack a steady bat and poise behind home plate. During Loyd Star’s last season, she batted .377, knocking in 15 runners and scoring four times. She recorded a 98 percent fielding percentage and was on the receiving end of 157 putouts.

Co-Lin head coach Allen Kent called Poole a strong athlete, praising her strong arm and versatility that will allow her to step into other defensive roles when she’s not catching.

“Marley handles the bat well and should really come in and be able to contribute,” he said. “She has the potential to put up some good offensive numbers. We’ve seen Marley grow up at our summer camps through the years, and it’s great to see how she’s grown into a very good athlete.”

Loyd Star softball coach Jan Delaughter still has Poole for one more season of fast-pitch this spring, saying the senior will be one of her team’s strongest hitters.

“I know Marley will be a great asset to Co-Lin — she’s very coachable. She accepts constructive criticism and doesn’t look for excuses,” she said. “She’s been a hard worker over the years, very dedicated, and I’ve enjoyed having her as part of our team.”

Poole’s mother, Regina Poole, said her daughter has a strong work ethic on and off the field and she looks forward to attending Co-Lin softball games next year. She also is glad her daughter chose to start college close to home.

“That’s what I like most about it. Having my first child go off to college is hard,” she said.

Poole plans to study education and wants to work as a teacher after college. Her sister, Meagan, is a junior at Loyd Star and plays at second base for the Hornets.