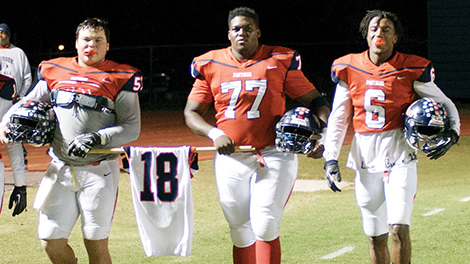 A handful of local high school football seniors have been selected to represent their region and state in upcoming all-star games, and two local coaches will be there to get them prepared.

“It’s a huge honor for me, a way to honor my city and everything that has helped in getting me where I am,” said Clopton, who is committed to play football at Southern Miss next year.

The players will live and practice at Camp Shelby Joint Forces Training Center for one week, feast at a banquet the night before the game and then have one final chance to demonstrate themselves to watching colleges.

Clopton has other players getting involved in postseason football.

The coaches’ association also hosts the Bernard Blackwell North/South All-Star game for accomplished senior players from north and south Mississippi, chosen from a list of runners up for the Mississippi/Alabama game. The North/South game will be held at 11:30 a.m. Saturday, Dec. 9 in Gulfport.

Thigpen — who will compete in the North/South game as a wide receiver — was also recently named to the All-Region first team from Region 8-3A, as well as its special teams player of the year.

“I’m just thankful. When coach told me I was selected, it made me play harder,” he said. “I used to play wide receiver, and I like it — I like the speed stuff. I’m a slot guy, and when you’re in the slot you can make big plays.”

Lawrence County coach Jaymie Palmer will coach Thigpen and other wide receivers in the North/South game.

“It’s an honor to coach in the North/South game. It will be fun to coach alongside these other guys,” he said.