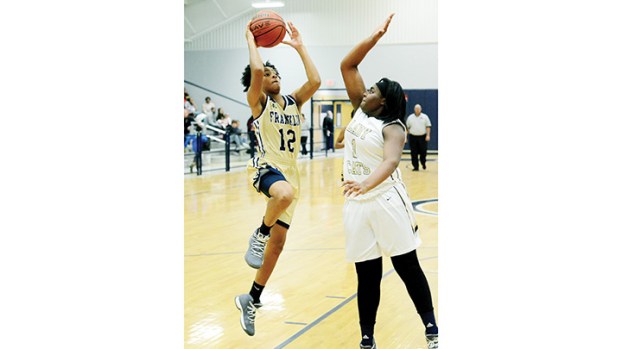 The Lady Bobcats were unable to battle back into the game against Franklin County Friday night, falling behind early and running out of gas late in a 50-32 home loss.

Bogue Chitto threw the first points on the board with 6:36 remaining in the first quarter and never led again. The Lady Bulldogs’ defense baited the home team into some early turnovers to establish a strong first quarter and held off the Lady Bobcats’ strongest stretch in the second. Both teams turned in an anemic third quarter before Franklin County’s depth allowed them to pull away in the fourth.

“I thought our effort was kind of lacking, but my team put up a good fight,” said Lady Bulldogs senior Autumn Covington. “It kind of slowed in the second half — we thought we had it made or something. Anything can happen in basketball.”

What happened to Bogue Chitto were turnovers.

The Lady Bobcats threw the ball away 28 times, erasing good work they did in other important statistics. They outrebounded Franklin County on both ends, had more steals and more assists.

But 28 additional chances were plenty for the Lady Bulldogs, even on a night when their shooting was off-target.

“We had some good looks at the basket but just couldn’t get the shots,” said Franklin County coach Rickey O’Quinn. “We didn’t rebound the ball as well as I thought we should, but we made enough plays down the stretch.”

Bogue Chitto sat on two points for most of the first quarter before finding another seven to close up Franklin County’s big 15-9 first quarter. The Lady Bobcats showed their most tenacity in the second, scoring 10 points to the Lady Bulldogs’ 12 and setting up a workable 27-19 halftime deficit.

Offensively, both teams were all elbows in the third quarter, scoring six points each in a flurry of missed jumpers and fouls. Lady Bobcats senior Lineka Newson slapped out some sweet blocks in the lane and Bogue Chitto got within six, down 29-23 with three and one-half minutes remaining in the third.

By then the Lady Bobcats were spent. They scored only seven points in the fourth while Franklin County popped in 17.

“We never hustled offensively,” said Bogue Chitto coach Christi Terrell. “We couldn’t get it together and missed a lot of easy shots. Franklin County just outran us.”

Newson led the Lady Bobcats in scoring and steals with 10 points and five takeaways. Karly Leake was second in scoring with eight points, while Cheyenne Hall and Anna Brumfield scored four each.

The win takes Franklin County to 8-4 on the season. They begin Region 7-3A play by hosting Port Gibson tonight.