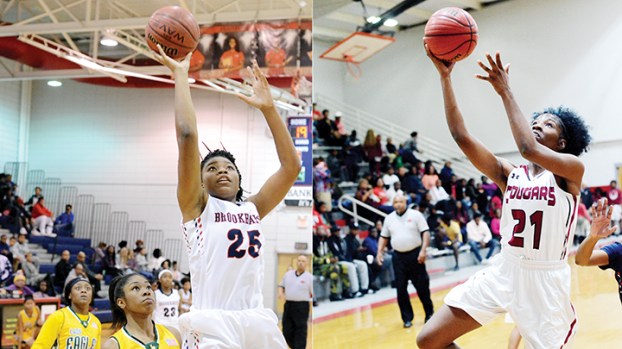 Two of the area’s top basketball players have been selected to compete in the state’s All-Star game.

Brookhaven High School junior Tamia Stallings and Lawrence County junior Kyunna Thomas have been named to the Mississippi Association of Coaches’ 2018 North/South All-Star Basketball Game. Normally rivals on two of the best girls’ teams in Southwest Mississippi, Stallings and Thomas will play together as teammates on the South Team.

The 2018 North/South All-Star Basketball Game will be played at 6 p.m. on March 23 at the A. E. Wood Coliseum at Mississippi College in Clinton.

Stallings was undoubtedly chosen for the South Team because of her presence in the paint. The Lady Panthers’ center is averaging 10.5 points and 10 rebounds per game so far this season. She’s scored 209 points and is shooting 49 percent.

Although pleased to be an all-star, Stallings is currently busy focusing on Brookhaven’s season and the work that remains. The Lady Panthers have been impressive this year, standing at 15-5 and 2-0 in Region 6-5A.

“We have to finish with a ring,” she said. “Most teams can’t handle our pressure defense — we press the whole game, and that wears teams out. But we still need to do some work on defense. But we’re still not where we need to be. We get beat too easy sometimes, and that causes us foul trouble.”

Lady Panthers coach Preston Wilson said Stallings is a big part of the team’s game plan. She’s hard to stop down low, and her commanding presence there opens up the court for Brookhaven’s shooters outside, he said.

“We like to see the ball go inside out first. Tamia is strong, and it’s tough for teams to defend her,” Wilson said. “It’s always an honor for a player to be able to go out and represent our school and district, and we know Tamia will keep on improving and go on to bigger and better things.”

Big things are happening for Brookhaven’s old nemesis Lawrence County this season, and Thomas is playing a key role for the Lady Cougars.

“I’m happy to participate in the all-star game. I’m proud, and it means a lot,” she said. “I’m going to get ready for the game. Right now I’m working on my shot and my defense. I’m going to try my best and hustle.”

Thomas had to be an appealing selection for the all-star committee. The junior guard is averaging 12.3 points per game this season, pulling in 6.6 rebounds and throwing in 2.7 assists per game. She’s scored 234 points this season and is a 39 percent shooter.

Like Stallings and the Lady Panthers, Thomas and the Lady Cougars have plenty of work to do before the season ends. The Lawrence County girls are 16-3 overall and 3-0 in Region 7-4A.

“I’ve got a great team. They’re always there for me,” Thomas said. “We’re going to finish this season strong. We take each game seriously.”

Lawrence County coach Vicki Rutland said Thomas is a competitive player for the Lady Cougars who takes the court with passion.

McComb junior Ebony Gayden will also play on the South Team, which will be coached by Franklin County coach Rickey O’Quinn.