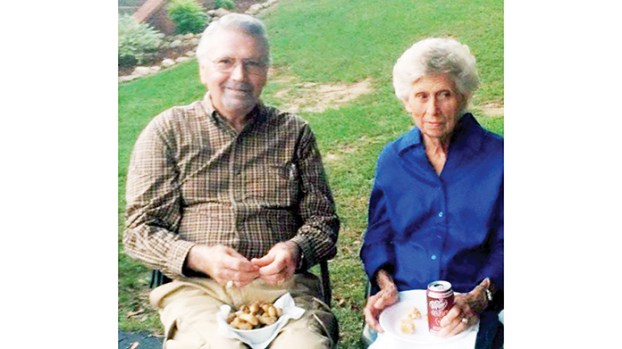 Photo submitted/Pictured are Henry and Kathryn Peavey at a church event.

The sister of Kathryn Peavey expects the woman to make a full recovery following the tragic attack in December that left her homeless and a widow.

Helen Funk, who is also chairwoman of the Mississippi Democratic Party in Lincoln County, said her sister has been released from the hospital but remains under a physician’s care. She is living with her son, Rev. Kenny W. Peavey and wife, Wanda. Kenny Peavey is pastor of Edna Baptist Church in Columbia.

Kathryn Peavey was an alleged victim of Tony Wilson, who is also accused of shooting to death Peavey’s husband, Henry, Dec. 19, at Peavey’s late mother’s home on Frog Ridge Road and then setting the man’s body and house on fire.

Wilson, who allegedly took his own life during a standoff with law enforcement officials nearly two weeks later, was the suspect in the assault on Kathryn Peavey.

Funk said her sister is a fighter.

“She managed to get herself outside of the house before she passed out,” she said.

Funk said she and Peavey spoke often before the tragedy, but she has not been able to talk to her much since the incident. She visited with her briefly at Henry Peavey’s funeral, which was held Jan. 6 at the couple’s church, Topisaw Baptist.

“She tires very easily,” she said.

The couple’s granddaughter, Alexa Peavey, has set up a gofundme account for her grandmother. The fund has raised $5,938 toward its goal of $20,000.  Donations can me made at www.gofundme.com/kathryn-peavey.