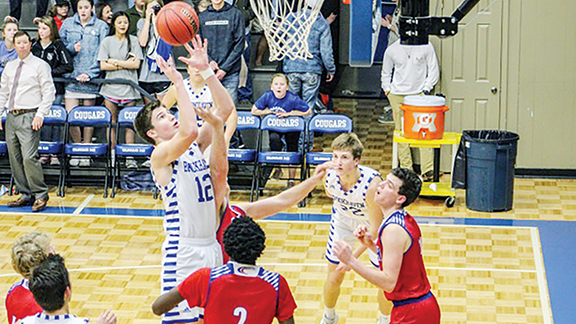 Brookhaven trailed Copiah 15-7 in the first quarter, but held the Colonels to just four points in the second, heading into halftime tied at 19. BA added 21 points to their total in the third quarter while allowing Copiah only four points, and the Cougars closed the deal in the final period.

“It being senior night and the last home game, it made me want a win more than any other game,” said BA senior Tate Felder. “We’ve worked really hard this season and getting a win on senior night with my fellow seniors was great.”

The Cougars were slow to start. They needed one big play to shift the momentum, and no better play could’ve sparked that tenacity than the unbelievable fast-break dunk from junior Cade Brown. After that, the points began to roll in and the John R. Gray gymnasium was engulfed in Cougar pride.

“It being my first game to start in, I wanted to come out, get a win and execute the coaching style that Coach Watts has had us doing all year,” said senior Dawson Zumbro. “The last home game of the regular season is one you always want to win.”

Brown and Flowers led the Cougars in defensive play. Brown had six rebounds, and Flowers had three steals. Flowers and Felder had four and three rebounds, respectively. Junior Tanner Thurman, sophomore Tanner Watts and Jackson each had one rebound. Jackson had two steals, while Brown, Zumbro and Nations each had one. The Cougars were sent to the line for a chance at 21 extra points.

“On senior night, you know there is going to be a lot of emotion and extra pressure, and being a coach, you don’t want too much emotion to get in the way of game play,” said coach Josh Watts. “That may have been the issue at the beginning of the game with the slow start, but, all in all, they played well and got a win on an important night.”

Brookhaven Academy enters the District 3-AA Tournament as the No. 1 seed. The Cougars will play the winner of the first round Thursday at Sylva Bay Academy. Tip off will be at 5:15 p.m.