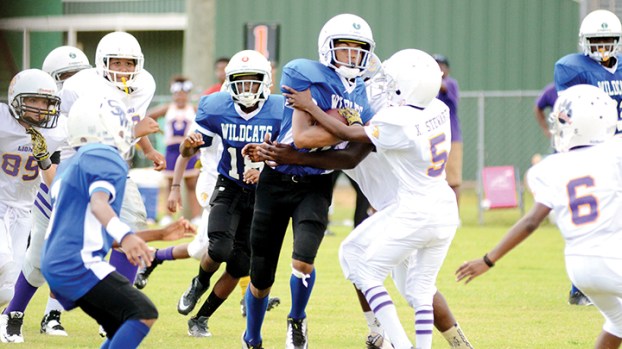 Daily Leader file photo/Members of Brookhaven’s Southern Wildcats football team compete in a football game. Early signup for the league will be held Saturday, March 24, at Lipsey Field at 10 a.m.

“The league is open to anyone from age 6 to 12, so this will give us a chance to get in some players early and start working with them,” he said.

Enrollment will also be open for cheerleaders in the same age range. Signup fees are $55, but Fells said no one should miss the sign-up day for lack of cash.

“We don’t want to turn back any child. If you can’t afford it, when you sign up we can discuss some options,” Fells said.

Fells doesn’t want any football players or cheerleaders left off the Southern Wildcats rosters because football isn’t really the goal.

The team’s motto is “Faith, Family, Education, Football.” Fells said football is a great way to accomplish the league’s mission of bringing young people together through sports to teach the values of teamwork, discipline and education.

“We teach the game of football, but it’s more about life lessons,” he said. “We’re in a community where you have single moms, or single fathers, or grandparents raising the children, so we want to step in not only as coaches, but as mentors.”

Fells said the Southern Wildcats roster hovers around 80 children each year, making the Brookhaven teams the second-largest in the Independent Youth Football League, which has teams in Magnolia, McComb and other cities.

The cats are always looking for positive role models to volunteer for the league, and seeking corporate sponsorship to help offset the costs of equipment and travel.

Anyone interested in signing up their children, volunteering or supporting the league may contact the Southern Wildcats at 601-455-6575.