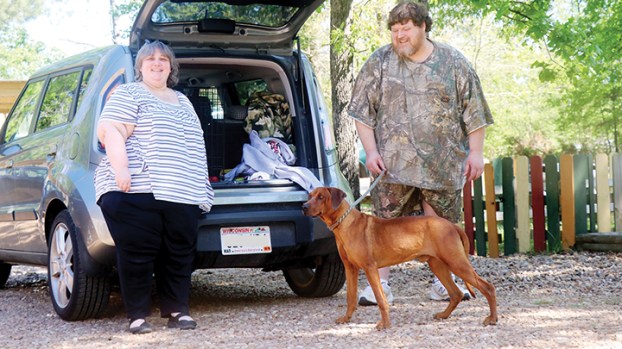 Photo submitted/James Newman and his wife, Cheri, drove from Sheboygan, Wisconsin, Saturday to the Brookhaven Animal Rescue League to adopt a red hound-mix they named Mississippi. The couple had already brought home his sister, who they named Molly, from a shelter in Wisconsin through a transport program. When they realized she had a brother, they made the trip to bring him home, too.

When owner meets pet, the smiles make all the hard work at Brookhaven Animal Rescue League worth it.

Like this past weekend, for instance, when volunteers got Myron ready to meet his new owners, a couple from Sheboygan, Wisconsin, who drove 14 hours to adopt him.

Cheri and James Newman adopted Myron’s sister, Myrna, from their local shelter in Wisconsin. Myrna and Myron had been at BARL since December, both undergoing treatment for hair loss. Myrna got better quicker and was transported via the Southern Pines Transport Program, which moves adoptable dogs from shelters with high areas of pet overpopulation to shelters where adoptable dogs are more in demand.

Myrna’s rabies tag got lost on the transport so Cheri Newman contacted BARL to get a replacement and learned about Myron.

“They found out Myrna had a brother named Myron who was still at BARL, and they’re smitten with Myrna, so they drove down Saturday to adopt the brother,” said BARL volunteer Sonya Littlefield said.

She said the couple loved Myrna, a red hound-mix like her brother, because of her sweet temperament and personality.

“They wanted another dog anyway, so they wanted to reunite the sister with the brother,” she said. “They felt like the brother would be a lot like his sister.”

The pair were named in December by shelter officials, but the Newmans decided they needed new names.

“We named him Mississippi, so they are now Molly and Mississippi. He settled right in,” said Newman.

“We are spoiling them and they are playing like pups, though together that is 100 pounds of long legs, giant paws and flopping ears.”

Those kinds of happy stories are made possible through the three fundraisers BARL holds annually. Plans for two of those are in the works.

BARKfest 2018: “A Day of Paws & Tails” will be Saturday from 9 a.m. to 3 p.m. at Brookhaven Exchange Club Park. The Exchange Club will be running rides from 10 a.m. to 2 p.m., with all proceeds benefiting BARL. Wristbands are $10 for unlimited rides.

Food will be sold and vendors will have booths set up with items available for purchase. GT Collision is hosting a car show as well.

“They’ll have a whole area just for their cars,” Littlefield said.

Other activities include a painted-rock hunt, a karaoke contest, a doggy day spa, face painting and a puppy petting zoo.

“We’ve got some tiny puppies this year,” she said.

A photographer will be available to take family pet photos with a floral background suitable for Mother’s Day gifts. Photos start at $5.

Well-behaved pets are welcome to attend BARKfest as long as they’re on leashes, she said.

BARL volunteers are also collecting items for the upcoming Cat’s Meow rummage sale on May 4-6.

Donations may be dropped off at the sale site, which is the former Outreach Ministries building at 101 East Court Street. Drop-off times are every Tuesday, Thursday and Saturday from 10 a.m. to noon. Other drop-off times can be arranged by texting 601-720-1505.

For more information on the sale, contact event chairperson Deana Pendley at 601-720-1505.

All BARL animals are vaccinated and spayed/neutered. Dogs are also micro-chipped. Anyone interested in adopting, contributing, or volunteering should contact BARL at 601-757-4367 or info@barl.net.

A few of BARL’s adoptable animals may be viewed online at www.barl.net or on their Facebook page.