Funeral services for David Clifton Moak, of Bogue Chitto, are Friday, April 27, 2018, at 10:30 a.m. at Sharkey Funeral Home in Summit with burial at Hollywood Cemetery in McComb. Rev. Rick Kennedy will officiate the services.

Mr. Moak, 64, died Sunday, April 22, 2018, at his residence. He was born July 9, 1953, in McComb, to Clifton T. “Cliff” Moak and Jeanie McCollough Moak. He was a faithful member of East McComb Baptist Church and later, New Heights Baptist Church, for many years. He was a veteran, having served in the U. S. Navy. He worked in the oil fields until he retired.

He was preceded in death by his parents; sister, Diane Moak Stewart; and brother-in-law, James Thomas “Jim” Stewart.

Survivors are his first cousins, Connley Moak, of Brookhaven, Ann Moak Sasser, of Summit, and Jennifer Moak Case, of Summit; a very special friend, Janet Stewart, of McComb; and a host of other family members and friends.

In lieu of flowers, the family requests donations to be made to New Heights Baptist Church. 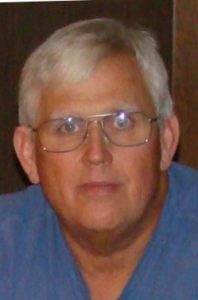