A taste for yogurt leads to research — Brookhaven… 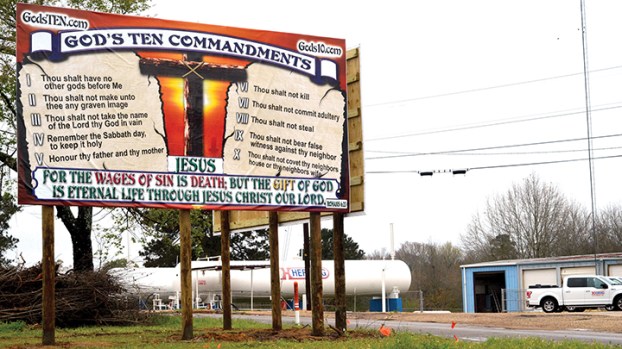 Photo by Adam Northam/A billboard featuring the 10 Commandments on one side and a call for America to “wake up” on the other stands at the southwest corner of the Hwy. 51 and Industrial Park Road intersection. The sign was erected without a building permit, and the city has said it must come down.

More than a month after a Brookhaven businessman’s Ten Commandments billboard created a hailstorm of righteous indignation when he was asked to remove it, the sign is still in the same place professing the “shalt nots” to drivers along Hwy. 51.

That should change soon, city building inspector David Fearn told the Brookhaven Board of Aldermen Tuesday.

Brookway Market owner Wayne Wallace put up a large billboard on the southwest corner of the Hwy. 51 and Industrial Park Road intersection listing the Book of Exodus’ Ten Commandments on one side and a call to “Wake up America” on the other. The sign did not comply with the city’s sign ordinance, nor did Wallace get a permit to put it up.

The city condemned the signs March 26 and Fearn asked him to take the sign down immediately because he had not applied for a permit. He cited violations of the city’s sign ordinance concerning construction material and distance from the public right-of-way.

Wallace planned to address the board April 3 and take a stand for religious freedom, but met with Fearn, Mayor Joe Cox and Ward 5 Alderman Fletcher Grice beneath the sign the day before. They came to an understanding that he would remove the existing sign to reinstall them on metal supports that would be placed 10 feet back on the half-acre strip of land he purchased earlier this year.

Fearn told the board that Wallace now has the poles and the engineering drawings to bring the signs into compliance. He submitted an application but has not picked up the permit.

Ward 6 Alderman Shelley Harrigill asked Fearn why the sign was not taken down while the process was underway.

“Why is he not required to take down the existing signs that were too close to the road?” she asked. “People are still complaining because they’re not in compliance. I got my first report complaint about it on March 14.”

“When we talked with him that day with the mayor and Mr. Grice and I talked to him out there, it was agreed that he could keep them up until he moved them where they belong and got them into compliance,” Fearn said.

“I still think they’re blocking, obstructing views,” she said. “Where are they going to be moved to?”

No other comments were made.