Fish for free in Louisiana this weekend 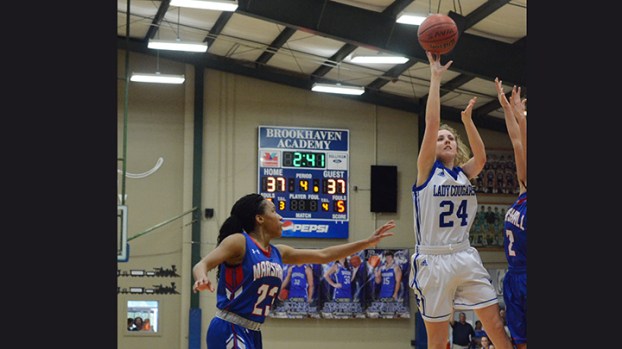 Daily Leader file photo Kaitlyn Jordan drives in for a layup against Marshall Academy. Brookhaven Academy defeated the Patriots for their first state championship since 2010.

Top 10: Lady Cougars take state in roundball — Coach Case and his team believed in God to get them through their ‘Red Sea’

That’s when junior Jana Case and Anne Brantley Warren made clutch free throws late, to push the lead out to 51-40.

The game wasn’t close for most of the first half, but the Lady Patriots’ run late in the game closed the gap to where the free throws down the stretch where critical for the Lady Cougars.

Marshall Academy was held scoreless in the beginning of the game, as Brookhaven Academy raced out to an 11-0 lead at the end of the first quarter.

The second quarter was tied, and the two teams went into the locker room for halftime with Brookhaven Academy leading 20-11.

Case led all players in scoring with 26 points, and junior Macy Grace Smith and Warren each contributed eight points to the total.

Brookhaven Academy finished the season with a 31-6 record, and won its first girls’ basketball state championship since 2010.

“I told the girls before we went on the floor, all God expects out of us is to get to the Red Sea. If we can get there with our effort, and have faith, he’ll open up the sea and we’ll win this game,” Brookhaven Academy girl’s basketball coach Jason Case said. “And the girls got to the Red Sea, and God did something great for us.”

“We just stayed together and focused on the game,” Smith said. “It feels amazing — I don’t really know how it feels. I’m just so happy we won.”

“I feel great,” Jana Case said. “I’ve always wanted to win a championship and now I know what that feels like.”

“I’ve been crying since it happened,” Anne Brantley Warren said. “All the emotions kicked in at once. It’s amazing.”