Gartman selected to Team Mississippi — After a strong… 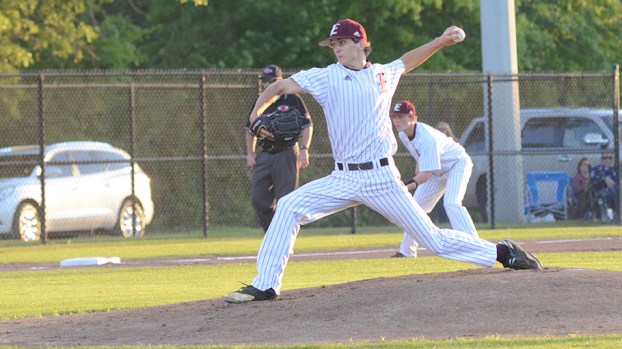 Daily Leader file photo Austin Fugler threw 6.2 innings and only gave up three runs in the contest against Perry Central. Fugler started off the Yellow Jacket rally in the bottom of the seventh with a base hit.

Enterprise entered the MHSAA 2A playoffs as the No. 2 seed in their district, but they hit their groove in the playoffs and advanced all the way to the third round.

Enterprise knocked off Pisgah in two games that weren’t extremely close, before entering a second round series against Enterprise-Clarke.

The Bulldogs had the home field advantage by virtue of winning the district title, but Enterprise-Clarke thwarted that advantage in the first game.

Junior ace Landon Gartman gave a stellar pitching performance, in which he went eight innings without giving up a run. The Bulldogs weren’t able to garner any runs in the contest, and an eighth inning run gave the Yellow Jackets a game one victory and put them one win from the third round.

After the win, the series returned to Lincoln County with the Yellow Jackets in control.

In game two, the Bulldogs took a lead in the top of the third inning, but Enterprise-Clarke responded with a run to tie the game.

With only three outs remaining before having to play a game three at Enterprise, the Yellow Jackets mounted a rally.

With the bases loaded in bottom of the seventh inning, the Bulldogs hit a batter to cut the lead to 3-2.

John Beard came to the plate with a chance to end the series.

He took advantage of the opportunity, as he laced a two-run single to left field to give Enterprise a 4-3 victory and into the third round of the playoffs against Perry Central.

Austin Fugler picked up the win for the Yellow Jackets, as he went 6.2 innings and gave up three runs in the contest.

“We started real slow,” Enterprise Yellow Jackets coach Cass Brister said. “Their pitcher did a really good job of mixing up pitches. He kept us off balance early. I’m very proud of the guys there at the end. We were down to two outs and hadn’t had a very good game. We were able to manufacture some things and get runners on base. It started with Fugler getting his big hit.”

“(Austin) Fugler pitched a great game for us,” Brister said. “We have two really good pitchers and have relied on them so much this year. We made a few errors, but it helps when you have pitchers that can pitch you out of the mistakes. We can’t continue to do that the further we go, we’re going to have to clean up the mistakes. I am proud of the guys.”