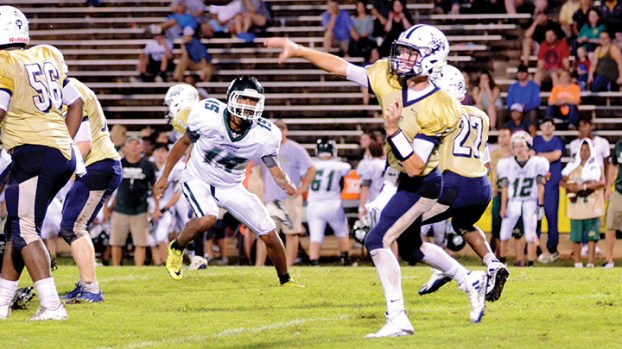 The 2A schools in the area could all be featuring new faces at the quarterback positions this season after some departures and graduations.

Senior Trey Nettles played well as a senior for the Bobcats last season. He went 63-150 through the air for 738 yards and four touchdowns in 2017.

Shaw King will step in for Nettles after his graduation, and King was able to get experience throughout the 2017 season in preparation for 2018.

King completed 46 passes for the Bobcats last season for 551 yards and four touchdowns. Bobcats head coach Gareth Sartin said he’s excited for what King brings to the table at the quarterback position.

“He got some game experience for us last season,” Sartin said. “He has a good arm. I think we can be pretty good throwing the football this season.”

The Hornets got solid production out of junior Dane Smith last season at the quarterback position. In a run-heavy offense, Smith completed over 50 percent of his passes, and rushed for 105 yards on the year.

Hornet head coach Brian Ford said that there would be a three-way competition at quarterback this season between Dane Smith, Logan Smith and Braden Ezell because of each players’ role on the defensive side of the ball.

“All three of those guys are going to have big roles on the defensive side of the football,” Ford said. “We want to have all three of them prepared to play that position.”

After a strong season last year, West Lincoln will have to replace Matthew Case at quarterback for the 2018 season.

Travis Hall and Jordan Davis will be the go-to options for the Bears this season at the position, according to head coach B.J. Smithhart.

“We think that both of them had very good springs, and that’s going to create a healthy competition going into the year. We feel comfortable with both in the system.

Smithhart said he’s always settled on playing one quarterback, but isn’t necessarily opposed to playing both.

“I’ve always just played one,” Smithhart said. “But with that being said, I’m not opposed to playing two. We’ll just have to see what’s working for us, and that’s what we’ll do.”

Brooks Burns and the Yellow Jackets will look to three players to step in and fill the quarterback role this season — Jaylon Grinstead, Lawson Chemin and Matthew Burns.

“We have three guys that we’re going to try at quarterback,” Burns said of the quarterback compettion. “All three are athletic and can get the job done.”