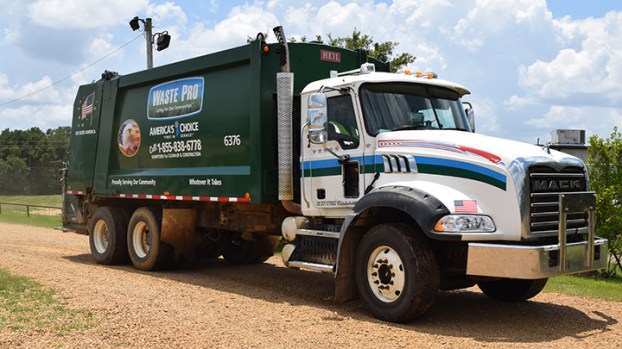 Photo by Adam Northam A Waste Pro truck leaves the company’s Brookhaven facility earlier this month. The company is nearing the end of its contract with Lincoln County for trash collection.

Waste Pro has rolled out incentives to employees who hang around for the last 45 days of its Lincoln County trash collection contract and will correct its widespread problem with missed pickups, a company representative said Monday.

Waste Pro Regional VP Randy Waterlander told the Lincoln County Board of Supervisors at a special-called meeting Monday his company has hired new employees, brought in three extra garbage trucks and promised bonuses to employees who stay on-board for the contract’s final six weeks in an effort to make up for hundreds of missed garbage collections in the county this summer. Beginning this week, garbage collection should improve, he said.

“Waste Pro and myself have a commitment to finish this contract professionally,” Waterlander said. “Do I like the situation? No. Do I want to make it all perfect? Yes. The only way to fix it is to confront it.”

Waterlander said around 40 percent of the workers in the Brookhaven office left the company when it became clear Waste Pro would not get the county’s next three-year contract, which was awarded to Alabama-based Arrow Disposal Service Inc. on July 2. The City of Brookhaven also dumped Waste Pro and went with Arrow, causing a year of bad service in the city and county to intensify throughout the month.

Supervisors, who had already established a telephone hotline for citizens whose garbage the company failed to pickup, were forced into the trash business, pulling work crews off the roads and making house calls to collect.

Two weeks ago, board attorney Bob Allen enacted a “cure breach” clause in the county’s contract with Waste Pro, giving the company until Aug. 2 to correct problems with its service or be billed for supervisors’ expenses. Supervisors have been keeping records of calls to the hotline, as well as addresses they’ve visited to grab missed garbage while Allen develops a fee scale to use in subtracting costs from Waste Pro’s nearly $90,000 monthly payments.

The threat seems to have worked, as supervisors on Monday reported fewer calls for ignored garbage over the weekend. Brookhaven Public Works Director Keith Lewis, who attended the county meeting alongside Mayor Joe Cox, said Waste Pro’s service in the city limits has improved to the point the city has stopped running garbage routes.

“We’ve never had quite as bad a situation as the county has had,” Cox said.

Williamson told one story of an older man in his district who had brought his full cans back off the road to sit another week when no truck arrived. He noticed the cans, backed his truck into the man’s driveway and took the garbage for disposal.

“First time in my life I ever stole garbage,” Williamson said.

District 5 Supervisor Doug Falvey told Waterlander he and his crew had visited more than 1,100 houses on 176 roads and picked up 17 tons of trash this month.

“I worked one day on county roads last week. The rest was picking up garbage,” he said. “I can’t stand that. It’s been very costly for me to have to spend time picking up.”

District 4 Supervisor Eddie Brown said he considers the amount of piled-up garbage around the county a health hazard. He told Allen he wants to ask the Mississippi State Department of Health for help in declaring it so.

Supervisors offered to send Waste Pro help — a representative from Natchez-based Hometown Waste LLC was at the meeting and handed out business cards. Knowing the county’s fee scale is days away from implementation, Waterlander declined.

“It will get much better,” he said. “There’s always a couple of misses, but we should be getting 95 percent this week, maybe 98 percent back to normal.”

Supervisors were not impressed.

“Let’s rephrase that, because ‘normal’ ain’t been good,” Brown said, claiming his phone buzzed with text messages about more missed pickups while Waterlander addressed the board. “Either you’re too small to handle the county, or you just don’t care.”

Waterlander said the Brookhaven office’s staff was replenished and extra crews were running Monday to clean up any misses. He advised citizens to continue to take trash to the roadside on their schedule days as normal.

“This week will tell the tale as to whether or not it’s where it’s supposed to be,” said Lincoln County Chancer Clerk Tillmon Bishop.