Experts: Mosquito spray nothing to get buzzed about 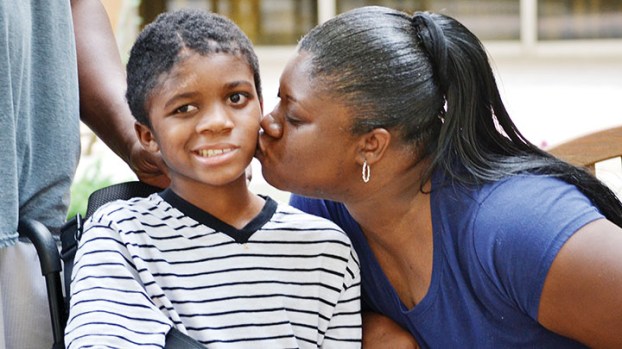 Photo by Donna Campbell/Darrius Bass gets a kiss from his mother Thursday in the Rainbow Garden at Batson Children’s Hospital. Pictured with Darrius are his father, Derrick Bass, and mother, Grace Price.

Though a bullet from a stolen gun nearly ended his young life, a 10-year-old with bright eyes and a crooked smile is beating the odds.

“I’m doing good,” said Darrius “Boo” Bass from his wheelchair, which is parked in front of a lunch tray in his small room in Batson Children’s Hospital in Jackson Thursday.

This room — with windows that overlook ongoing construction — has been home to Darrius and his parents, Derrick Bass and Grace Brice, since the accident June 4.

That’s how they explain to Darrius why he’s spent his summer in a hospital instead of playing outside his Brookhaven home with his friends. They’re not ready to tell him about the shooting yet.

Darrius was an innocent bystander, playing in his aunt’s yard on Henry Myers Street, when someone he did not know accidentally fired a gun from a car parked at the house. The bullet crashed through the windshield and struck the boy on the right side of his head.

Taruis Maurice McNair Jr., 20, of Starkville, was charged with aggravated assault and several auto burglaries in connection with the shooting. He told police he’d stolen the gun during an auto burglary the night before.

After Darrius nearly died twice, and was strong enough to talk, he asked his parents what happened. His mother told him he’d gotten sick, but Darrius — who rarely gets a sniffle — knew that was a bluff. So she told him he’d had an accident, and changes the subject when he pushes for more answers.

Grice wasn’t at her sister’s house that afternoon when she nearly lost her son. Her knowledge of the events June 4 comes second hand.

She said her nephew, her sister’s oldest son, told McNair to put the guns away.

“He was like, ‘Man, chill out with the gun,’” she said. “He pointed the gun and the clip fell out of the gun but it was still a bullet in the chamber. He pulled the trigger and it went off and shot my son in the head.”

Brice’s sister tried to call 911 but was too hysterical to dial. The nephew grabbed Darrius up, put him in a car and rushed him to the hospital.

“He was saying, ‘Junior, where’s Momma at. Call Momma. Tell Momma,’” she said. “My 11-year-old son J’ Shaun called me hollering and screaming and crying. I was like, ‘What’s wrong? What’s going on.’ He was like, ‘Momma, help Boo. He’s been shot.”

She closed her eyes, reliving that phone call.

“You never thought it would happen to you,” she said. “You hear about it all the time.”

When she got to King’s Daughters Medical Center, they took her to a room to calm down. They told her it was bad. She prepared herself for a funeral.

But Darrius was sent to Jackson and survived the night. His brain was swollen, he was on a ventilator and feeding tubes and he was sedated to let his brain heal. But he was alive.

A week later he could move his arm, then his legs. He could open his left eye.

Nearly three weeks after the shooting, he was off the ventilator for two days. Then he stopped breathing and his brain was bleeding. His mother prepared for the worst again. She cried a lot.

Bass tried to keep her strong.

“He said we’ve got to be strong. ‘If he wakes up and sees us crying he’s going to start crying. We need to be strong.’ But I didn’t see it that way. I’m the momma so I’m going to cry,” she said.

“That’s what we needed. What we still need,” she said.

Grice said it’s been a rollercoaster, but Darrius is defying the odds. She laughs remembering the first time he spoke to her.

“It was a blessing. I prayed and I cried,” she said.

Now she’s waiting for the good news that they can come back home to Brookhaven, where her older sons are going about their routine without them. Timothy Smith, 19, and Anthony Smith, 17, are both at Brookhaven High School. J’Shaun Brice goes to Lipsey Middle School. Their mom tries to check on them in person on Fridays, but Darrius likes to keep her in his sight.

“He’ll call me and tell me he needs me back up here,” she said.

Darrius was a happy kid Thursday, eating lunch in his room with his mom nearby on the hospital couch that has been her bed for three months. A stack of colorful blankets sat folded nearby.

He fed himself, avoiding the mound of green and orange vegetables on the tray. His mother said he’d prefer to eat chili cheese fries or get a Happy Meal from McDonald’s that’s located in the hospital.

Darrius can’t lift his left arm — the bullet struck his right side — so he uses the other hand to do the work. His left leg is in a brace, too. His parents hope inpatient rehab seven days a week, sometimes twice a day, will help strengthen them. When he’s not sitting in his bed, he wears a blue helmet, much like batters wear at home plate. That’s to protect the area still missing part of the skull, which is being kept viable so doctors can replace it when he’s healed enough, Grice said. Darrius doesn’t like wearing the helmet.

He doesn’t care for the rehab much either, but he likes his nurses and therapists.

“They’ve been pretty good to me,” he said.

“Miss Annie” sings Drake’s “In My Feelings” to him when he’s pedaling his cycle up and down the hallways. Darrius breaks into song to demonstrate.

“Kiki, do you love me? Are you riding? Say you’ll never ever leave from beside me ‘Cause I want ya, and I need ya. And I’m down for you always,” he croons.

He gets excited at the mention of his birthday. He’ll be 11 Dec. 13. He’s already asking for video games for his Xbox. His other request is to go home.

“I ain’t being up here for my birthday,” he said, hopeful. “I don’t want to be here every day. I want to go home and see my brothers.”

Grice has been able to take time off from work at Florida Care Properties since the accident, but she has to return to her job by Aug. 27. Her sister-in-law, Neda Humphrey, created an account on an online fundraising platform to help with travel expenses back and forth to Batson. Donations can be made at www.gofundme.com/prayers-for-boo.