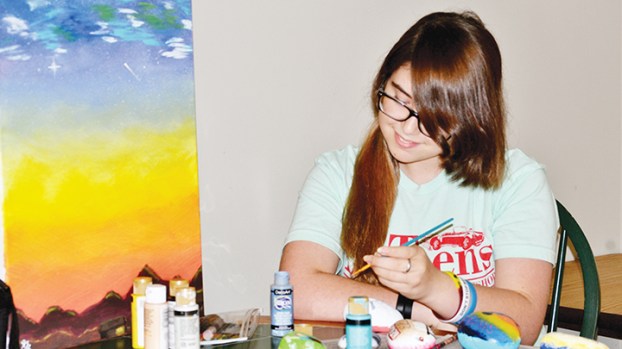 Photo by Donna Campbell/Enterprise High sophomore Katlyn Hemphill, an artist known as Kat, is hand-painting 20 rocks with designs inspired by the music of “Newsies,” an upcoming Brookhaven Little Theatre production. The rocks will be hidden later this month and when found, can be redeemed at The Daily Leader for a pair of tickets to the show.

Teen artist: ‘I just let my imagination make the rock’

Kat Hemphill’s theater career is off to a rocky start.

The Enterprise High School sophomore has been tasked with painting 20 rocks to promote the Brookhaven Little Theatre’s upcoming production of “Newsies: A Broadway Musical.”

The rocks —  which range in size from a double cheeseburger to a slider — will depict scenes inspired by the songs of the musical.

“Newsies” is a musical based on the 1992 film “Newsies” which in turn was inspired by the real-life newsboys strike of 1899 in New York City. It features music by Alan Menken (“The Little Mermaid,” “Aladdin” and “Beauty and the Beast”) and lyrics by Jack Feldman (“Copacabana”). The musical took home Tony awards for Best Original Score and Best Choreography.

BLT is the first community theater program in Mississippi to premiere the Broadway musical.

Hemphill’s rocks will play a part in a ticket giveaway by The Daily Leader and BLT.

Twenty rocks — each hand-painted with a “Newsies”-themed design — will be hidden in high-traffic areas of Brookhaven later this month. Each rock can be redeemed at the newspaper office at 128 N. Railroad Ave. for a pair of tickets to one of the eight shows scheduled.

Watch for promotional ads in The Daily Leader to know when to start looking.

Hemphill, a self-taught artist, is letting the musical inspire her designs. She listens to the Broadway songs and picks out references she can illustrate.

“I just let my imagination make the rock,” she said.

Ricky Hemphill said his daughter has studied the play as much as the actors.

“Usually whenever we come home from work, it’s on the TV,” he said.

He and his wife, Felicia, bought 40 pounds of rock from Zetus Rock and Boulder for the project. The rocks are larger than the ones the mother-daughter artists usually paint and hide.

“It gives her a little more area to put more details on,” her father said.

Hemphill, who will turn 16 in less than two weeks, has become a huge fan of BLT since teen actor Connor Cagle encouraged her to get involved with BLTeens this past summer.

She played a high school student in the ensemble for “Grease,” while Cagle played Kenickie. Cagle is the main character Jack Kelly in “Newsies.”

“I participated in ‘Grease’ and I loved it and I’ve been helping with BLT ever since,” Hemphill said.

While she was part of the ensemble cast, the theater bug bit her hard.

“It was background. It was a start,” she said.

Now she’s working on set design for “Newsies.” She likes being on stage and behind it.

“I love all of it, anything to do with the theater,” she said.

Painting has also become a passion.

Hemphill started painting rocks with her mother earlier this year when the popularity of the trend skyrocketed in Brookhaven.

“All of Brookhaven was painting rocks and when I saw them finding rocks, I wanted to paint some,” she said.

Many of her works of art are pictured on the Rockin’ Ole Brook Facebook page.

Before she discovered the joys of acrylic paints, she created pencil drawings, filling up the lined pages in notebooks.

She’s been doodling since she was 2 years old.

“I have to buy about 10 extra notebooks for school every year because she’s going to draw in every one of them,” her dad said.

The paint was something new.

“I had tinkered with it but I wasn’t very good at it,” she said.

She quickly mastered the art of painting on the stones so she can hide them for others to find.”

“The excitement, knowing that little kids could find them, it’s fun,” she said. “And whenever your job is fun, it makes you work harder and you love what you do and you get better.”

She figures she picked up her talent as an artist from her mother, though neither realized that talent until they had a rock and a paintbrush in each hand.

“She never believed she could paint, but she wanted to paint for the kids to make  kids happy,” Hemphill said of her mom. “I guess she got me into rock painting because she started it.”

It takes her 30 minutes to an hour to finish a rock. She sketches out the design then fills it in with color. She listens to music sometimes, but not usually.

“I like the quiet when I paint so I can think,” she said.

She lets the paint dry overnight then adds a clear coat for protection.

She’s painted about 50 rocks so far, not including the rocks she’s doing for BLT.

During BLTeens, Hemphill painted The Haven on a rock and presented it to Emily Waterloo, the artistic director of Brookhaven Little Theatre.

“I was just blown away, it’s so amazing,” Waterloo said. “She’s just really a spectacular and very artistic child.”

She also gave a BLT rock to Paden Phillips, her director for “Grease.”

Now that Hemphill has discovered paint and performing she’s hoping to attend the Mississippi School of the Arts her junior and senior year. She wants to hone her artistic and drama skills and push herself creatively.

As for “Newsies,” Hemphill is psyched to see the production play out from start to finish.

“It’s going to be amazing. I believe in all the actors,” she said.