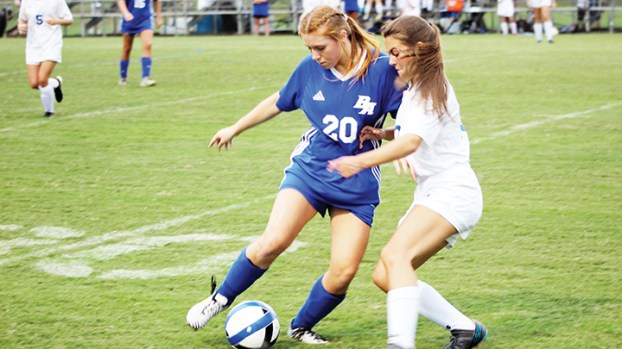 Photo by Katie Furr/Makayla Martin of Brookhaven Academy fights for possession with a Laurel Christian defender. Martin scored a goal for the Lady Cougars in their 3-2 defeat on Tuesday night.

Brookhaven Academy had been fighting back all match long after going down 2-0 early to Laurel Christian on Tuesday night. Just when it looked like the Lady Cougars could breathe easy by scoring a tying goal, the Lady Lions would respond in less than 30 seconds with the go-ahead goal in a 3-2 Laurel win.

BA had tied the match on a penalty kick goal by senior captain Ainsley Allen. After a foul in the box Allen feathered a soft shot to the lower corner to beat the Laurel keeper and give her team hope of a victory.

Following the post-goal kickoff Laurel quickly dumped the ball into their box where a foul was called on Brookhaven. Laurel converted the kick to quickly regain the lead.

Lady Cougars coach Mark LeBlanc thought the foul call against his team could have not been called, but LeBlanc also knows his team had previously benefited from a questionable call themselves.

“I’m not sure if we really fouled them in the box on their penalty shot, but at the same time I’m not sure they fouled us on the play we got a penalty shot on,” said LeBlanc. “Laurel is a very skilled team and they put a lot of pressure on you by controlling possession.”

Laurel took their lead on a header that came off a scramble in the box and a 35-foot strike that beat Lady Cougars keeper Olivia Lewis.

The game was stopped when heavy rain moved in just after halftime. The delay was extended due to lightning as the teams stayed off the field for nearly an hour while the weather system passed through the area.

Sophomore Makayla Martin had put the Lady Cougars on the board just before half when she curved a shot past the Laurel keeper from inside the box.

LeBlanc says his team struggled in the midfield in the second half but improved at adjusting as the game progressed.

Brookhaven Academy recently lost senior co-captain Natalie Rials to an injury for the remainder of the season. Rials — a midfielder — has been a starter since her eighth-grade season.

“We had to ask our attacking midfielders to not drop back so much and when you do that you’re sacrificing scoring opportunities,” said LeBlanc. “I’m proud of how hard the girls fought to get back in it and tie the match up.”

The loss was the first district defeat for the Lady Cougars. The teams will play a rematch tonight in Laurel.  A win for BA would tie the teams atop the district standings.

The top two teams from the district qualify for the playoffs and Brookhaven Academy is in a three-team race with the Lady Lions and the Cathedral Green Wave.

The Lady Cougars own a win over Cathedral from earlier in the season. On Monday, Sept. 17, the teams will resume a game that had previously been delayed by rain. The Lady Cougars will be leading 1-0 with 60 minutes remaining in the match when play resumes at Brookhaven.