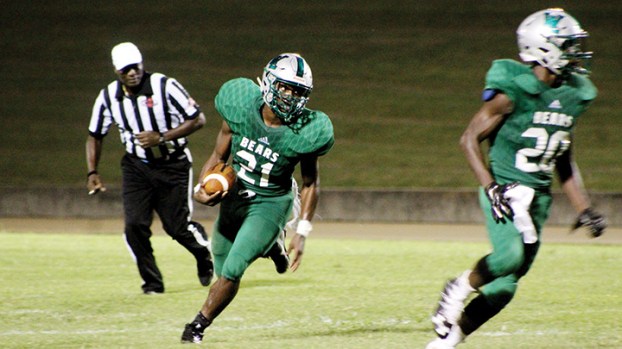 Photo by Cliff Furr/Michael Brothern and the West Lincoln Bears look to get back on the winning track against Pisgah this week.

For the second consecutive week the West Lincoln Bears (2-2) will host a powerful program from Rankin County when the Pisgah Dragons visit for a homecoming matchup tonight.

The Dragons are coming off a 9-4 season in 2017 when they trotted out one of the best running backs in the state. Fortunately for their opponents, Don Ragsdale has now moved on to suit up for the Hinds Community College Eagles. All Ragsdale did last season as a senior was rush for 3,132 yards, 34 touchdowns, and averaged nearly 300 yards rushing per game.

Even without their workhorse, West Lincoln coach BJ Smitthart says the Dragons are still formidable.

“They are going to line it up and power the ball right at you,” says Smithhart. “It’s amazing how many drives they’ve had this season that have gone for 20 or more plays. They’re going to try to grind you down.”

As a team the Dragons are averaging 347 yards rushing per game and are led by senior Noah Thweatt. The 6-foot-2, 210-pound Thweatt has run for 686 yards on 97 carries this season while scoring seven touchdowns.

Smithhart says he’s enjoyed seeing his players and the rest of the school have fun during homecoming week, but his players have something to prove on the field.

The Bears are coming off of a 56-0 home loss the Pelahatchie Chiefs.

“They played great and we played terrible,” said Smithhart. “I can tell the kids are excited to get back out and show that we’re better than that.”

The pre-game homecoming ceremonies, including the crowning of the queen, begin at 6 p.m. on the football field. Kickoff is at 7 p.m.