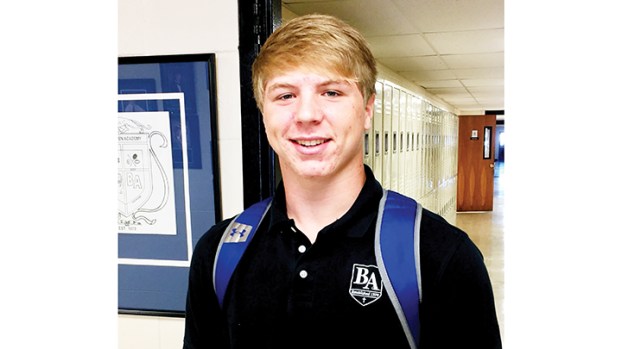 Photo by Brian Emory/Nick Ogden, Offensive Player of the Week

Offensive Player of the Week Ogden prefers to run over opponents

Nick Ogden has always been known as a baseball guy.

He’s played the infield, outfield and pitched in his career for the defending AA state champion Brookhaven Academy Cougars. A junior, Ogden is in his first season as a starting running back for the football team and has been looking for his first breakout game.

On Friday night in a 54-26 win over Ben’s Ford, Ogden finally had the performance he’d been craving. He bulled his way to 144 yards and four touchdowns on only 10 carries. For his efforts Ogden has been named The Daily Leader Offensive Player of the Week.

Ogden lined up at running back as a sophomore, but on a Cougar team that was loaded at the skill positions, he only earned 10 carries all season.

Going into spring practice, Ogden had hoped for carries as a halfback, but knew he’d start practice as a fullback. His plan was to make the most of any opportunities he got.

“In the spring I just told myself to run the ball as hard as I could every time I touched it, and if I did that I knew the coaches would notice my effort and give me more carries,” said Ogden.

Part of the reason that Ogden hasn’t been ridden too hard as a ball carrier is because of his value to the team as a linebacker.

Ogden made 107 tackles as a sophomore in 2017, tops on the team. He also grabbed two interceptions, caused two fumbles and recovered two fumbles last season.

He gives the reason for his success as a ball carrier to his offensive line.

“All credit goes to my offensive line,” said Ogden. “They make the holes and I just follow the path they lay out. They were really in-sync last week and it made my job easy.”

Against Ben’s Ford Ogden averaged 14.4 yards per carry and had a long run of 61 yards.

As someone who has spent so many snaps seeking contact as a linebacker, Ogden doesn’t shy away from it as a running back.

“I love to run people over,” said Ogden. “If I can run past them or run over them, I’m going to try and run over them.”

As a powerfully-built, 190-pound 6-footer, Ogden is used to taking a beating when he plays both ways. He also made four tackles in the win over Ben’s Ford.

“I’ll run the ball and play linebacker, whatever I have to do to help my team win,” says Ogden. “We’re still trying to gel as a team. We’ve got a lot of young guys and every week is a chance for us to show that we’re growing up as a unit.”