Faith leaders say ‘We need to care for one… 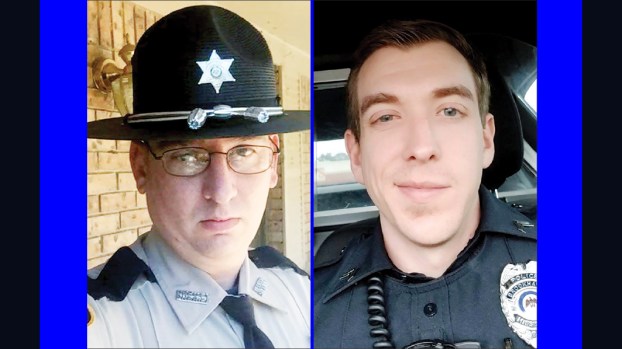 Patrolman James Kevin White, left, and Cpl. Zach Moak were killed in the line of the duty.

Back-to-back funeral services for two Brookhaven police officers killed in the line of duty Saturday will be held this week at Easthaven Baptist Church.

Visitation for Cpl. Walter Zachery Marshall Moak, 31, of Brookhaven, will be Wednesday from 5 until 9 p.m. at the church and will continue Thursday from 9 a.m. until the service begins at 11 a.m.

State and American flags on public property will fly at half-staff from sunrise today until sunset Thursday, to mourn the loss of White and Moak, according to a statement from Bryant.

The two officers were fatally shot Saturday morning while responding to a police call on North Sixth Street.

“On behalf of the City of Brookhaven, I would like to extend my sincere condolences to the families of James White and Zach Moak who gave their lives in a senseless act of violence while in performance of their duties,” Cox said.

The Mississippi Highway Patrol Honor Guard will stand guard beside the officers’ caskets both days for 30-minute intervals and will conclude with taps played and the rifle salutes at the graveside services, said MHP Cpl. Brandon Fortenberry of Troop M in Brookhaven.

The honor guard is a team of troopers who travel the state to honor fallen law enforcement officers.

“It is the greatest way to show honor for the ones that have sacrificed their life,” he said.

Rev. Dustin George said Easthaven considers it “the highest honor” to support the White and Moak families in their time of loss.

“At these moments, words fall short as we try to make sense of the tragedy, but there are some things we know for certain: these officers are heroes, they gave their lives protecting and serving the citizens of Brookhaven and they will be honored and remembered for their sacrifice,” he said. “We join our prayers with those of so many others in our city, state and across the nation as we ask God to bring healing, comfort and strength to these families and to all who are a part of the law enforcement community.”

Lincoln County Sheriff Steve Rushing said several of his deputies and law enforcement officers from other agencies will be taking over shifts for Brookhaven police officers over the next three days.