Much riding on Panthers’ trip to Natchez 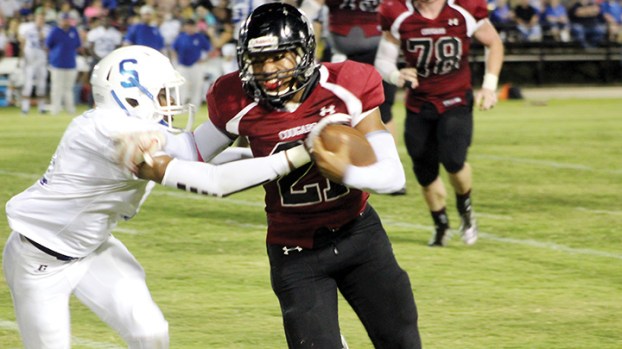 Photo by Cliff Furr/Lawrence County junior running back Perez Tyler fights off a Sumrall defender to gain more yards in a 28-21 Cougar victory.

The Lawrence County Cougars (6-2) wrap up their regular season home schedule Friday night at 7 p.m. when they host the Purvis Tornadoes (1-6) in Monticello.

Longtime Purvis head coach Perry Wheat stepped down in 2017 after a 6-7 season, citing a need for the program to be led by a new voice. Wheat had been at Purvis for 12 seasons.

The lone Tornado win this season under new coach Brad Hankins is a 48-8 win over Columbia Academy. Hankins was the defensive coordinator under Wheat before ascending to the head job.

The Tornados have a Southern Miss commit on their offensive line in 6-foot-8, 295-pound blocker Matthew Ryals. Even with a hoss such as Ryals at the tackle position, the problem for Purvis this season has been putting points on the board. The Tornados are averaging just 10 points per game in their six losses.

“They line up in several different formations, so it adds some extra preparation,” said Cougars head coach Jesse Anderson.

In their 28-21 win over Sumrall, the Cougars got a big game from junior running back Antwan Pittman, who rushed 12 times for 134 yards and a touchdown. Leading rusher Kylan Cooper chipped in 90 yards on 14 carries. Cooper needs just 37 yards to go over the 1,000-yard mark.

Lawrence County’s final home game Friday night will be followed by trips to Greene County and Poplarville in the final two weeks of the season.