Flea to Wesson market on Saturday 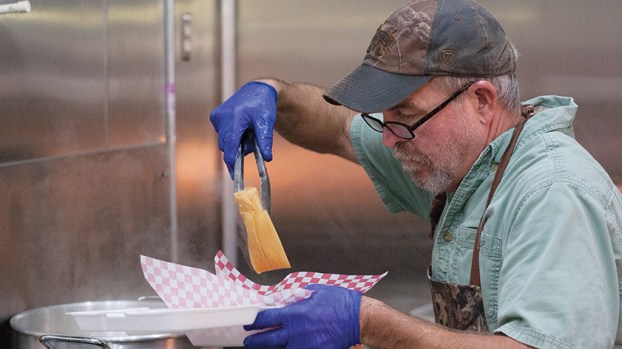 Photo by Adam Northam/Owner and chef Jamie Gatlin plates up tamales to go in the kitchen of his new restaurant, Bogue Chitto Boys.

The recipes have come down through the ages, and he calls them what he’s called them all his life.

“Mamaw Theresa’s red hot” — a hot sauce, the recipe for which he was taught by his mother-in-law 30 years ago. Jamie Gatlin, 53, hasn’t changed the mixture a lick, and he serves and sells it, just like mamaw did, at his new restaurant, Bogue Chitto Boys on Hwy. 51 in Bogue Chitto.

“A recipe that’s been bragged on for 100 years, there’s hardly any way to improve it. Believe me, I’ve tried, and failed,” he said. “The food speaks for itself.”

Gatlin, who’s owned Growin’ Green landscaping for 27 years, said opening up Bogue Chitto Boys has been a lifelong dream, and he’s cooking food made-to-order, fresh, home-grown wherever possible. The only thing frozen he serves is fish — it has to be — and nothing comes out of a bag or can.

He serves fresh chicken, Black Angus beef, hand-cut potatoes, vegetables and herbs grown in a garden right outside, between the front door and the parking lot. Fried foods are hand-battered and flavored, while meat is either smoked out back or cooked on iron, over an open flame.

“It’s not a fast food joint,” Gatlin said. “I want my customers to feel like they’ve eaten something at grandma’s house. When I was in the kitchen with my grandmother, helping and watching, you knew how much love she put into her cooking.”

Gatlin has always been a man of the kitchen, he’s just never been paid for it.

He’s catered parties and weddings, smoked hundreds of chickens for fundraisers and church events. He’s cooked overseas as a member of the Baptist Medical and Dental Mission to Honduras, a nation he calls his “second home” and whose people he loves. He’s gone to Honduras every year for 15 years after stepping in to take the place of a family member who died in a car accident just weeks before the mission in 2003.

“Where I get my relaxation is from cooking,” Gatlin said. “It’s a lot of work, but I get satisfaction from satisfied, full customers.”

Since opening on Sept. 14, Gatlin has had little time for anything but work. He’s still landscaping in the mornings and on Sunday afternoons before walking down 15 feet of sidewalk from Growin’ Green to Bogue Chitto Boys, where he cooks into the night, sometimes working 16 hours per day.

People have noticed. Gatlin said he can’t make enough smoked chicken salad, smoked pimento and cheese or tomato pie, the latter of which is made from a crust of Cheese Nips and includes smoked Gouda cheese grits; a mixture of mayonnaise, cheese, bacon, green onions and spices; and interspersed with layers of fresh tomato. A half pan of tomato pie weighs nine pounds.

Tom Pierce, who works across Bogue Chitto at Gatlin Feed — not one of Jamie’s operations — said plain, ol’ chicken tenders are his favorite item on the Bogue Chitto Boys’ menu. For now, anyway.

“I’ve had something different just about every day I come in here. I want to try the whole menu, everything has been so good,” Pierce said. “I don’t know how he cooks the chicken tenders, but you can’t find tenders like that around here anywhere.”

Brookhaven’s Pam Case ended up at Bogue Chitto’s Boys Thursday for lunch after someone told her to check it out. She went with the pork butt sandwich.

“It’s really good,” she said. “It has a good, smoked taste, and the barbecue sauce he makes is really good, too.”

Brookhaven’s Gwen Furey sat across from Case with a hamburger.

“But if you had just these fried green tomatoes, you’d be happy,” she said.