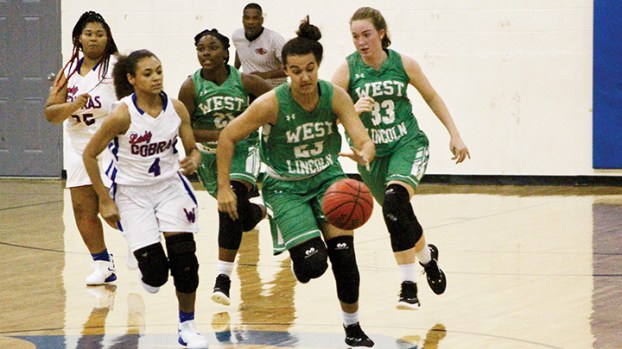 Lady Bears double up on Wesson

The West Lincoln Lady Bears opened their season on Tuesday night with a 62-31 win over Wesson on the road.

West Lincoln is coming off a 19-8 season in which they finished 7-1 in division play and were edged out 56-53 by Collins in the second round of the MHSAA 2A state playoffs.

“They hear it from me all the time that last year is over,” said West Lincoln coach Brooks Smith. “We’ve got to be focused on what can we do to get better this season.”

On Tuesday, what the Lady Bears did well was shoot the rock. Senior guard Skylar Hall was en fuego as she scored a game-high 28 points. Hall piled the points up by knocking down six three-pointers. Senior point-forward Megan Gerald added 19 points for the Lady Bears. Gerald hit five three-pointers — all in the first half.

Hall led the team with a 12.6 per game scoring average last season and was followed by Gerald at 10.6 points per game.

Gerald hit a long three-pointer from just over the half court line that beat the halftime buzzer. That shot banked in and put the Lady Bears up 33-12 at the break. The basket came after a long lull that saw the teams stuck at a score of 30-10. Smith says fighting off those types of lapses is something he wants his team to stay away from in 2018-2019.

“We need to not play to the score,” said Smith. “When we go without scoring I’m thinking about what would happen if we did this later in the season in a close region game.”

The scoring lapse didn’t matter against Wesson because the Lady Bear zone defense was smothering. Hall and Gerald are joined in the starting lineup by seniors Elizabeth Stogner, Katelyn Dickerson and junior Bailey Wilson.

Dickerson and Wilson do the dirty work inside, as they averaged 7.8 and 6.8 rebounds per game, respectively, in 2017-2018. Gerald measures around six feet tall and Wilson stands close to 6-foot-1.

When the ball went into the post, the Lady Bears would collapse and cut off any chance for the passer to find an open Cobra. The West Lincoln defense eats up the court with their collective size and leaves little space for the opposing offense to operate.

Gerald is a player that many teams would put in the post near the basket, but her size and ability to shoot over smaller players allows the green and white to stretch defenses.

For coach Michelle Nunnery, it was a tough matchup in her first career home game as head coach. Nunnery has been the head coach for Wesson softball for a number of years and has also served as a head junior high coach and varsity basketball assistant in the past.

“I played softball and basketball at Southwest and Mississippi College,” said Nunnery. “I’ve never been able to pick which one I love the most and I’m thankful for the chance to get back on the court to coach.”

Nunnery replaces Candice McDuffey and is attempting to build up a Lady Cobra program that has finished a combined 5-44 over the last two seasons. The last winning season for Wesson was an 18-12 season in 2011-2012 for former coach Rusti Magee.

“It was tough for us to get uncontested shots off tonight against their length,” said Nunnery.

The Lady Cobras are strong at the point guard spot where junior Shelbi Maxwell is a more-than-capable ball handler. Maxwell is small, but quick and is also a standout softball player for Wesson.

On Tuesday, it was senior Alissa Coone who led the Cobra offense with 12 points. Coone got everything from behind the three-point line as she twice banked in long shots from the wing.

“We’re going to have to find some inside scoring, but Alissa can knock down shots and Shelbi has the speed for us to push it when we can,” said Nunnery. “I had these girls in junior high and they’re a coachable group. It’s going to be important for us to learn from our mistakes each week.”