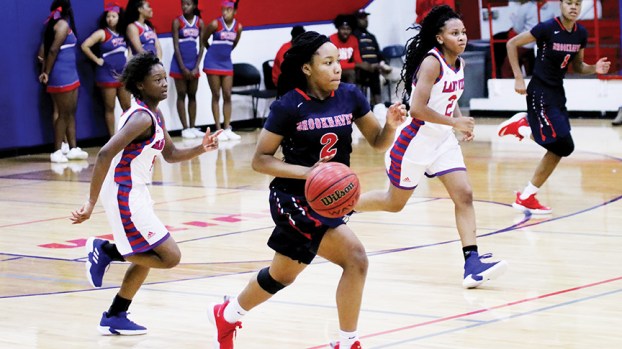 Photo by Becky Green Brookhaven High sophomore guard Ashanti Lewis beats the Warren Central pressure on Thursday night in Vicksburg. BHS next returns to the court on Dec. 28 when they take part in the McComb Holiday Tournament.

The Panthers went to Warren County and came home with a sweep over the 6A Warren Central Vikings on Thursday night.

In the boys’ game, the Panthers (12-2) got 22 points from Lafollette Bogan in a 54-44 win over the Vikings. Bogan also added 11 rebounds and four assists. Senior John Hilbert continued his strong play of late with a double-double of 12 points and 12 rebounds. Jermario Hersey scored eight points and La’Darius Thrasher added six points for BHS. Isaiah Wall scored four points and Kadarius Wells rounded out the Panther scoring with two points.

It was a rough night in Lamar County for the Yellow Jackets, as Lumberton took a pair of wins away from Enterprise.

Enterprise next plays on Jan. 8 when they open region play by hosting Amite County High School.