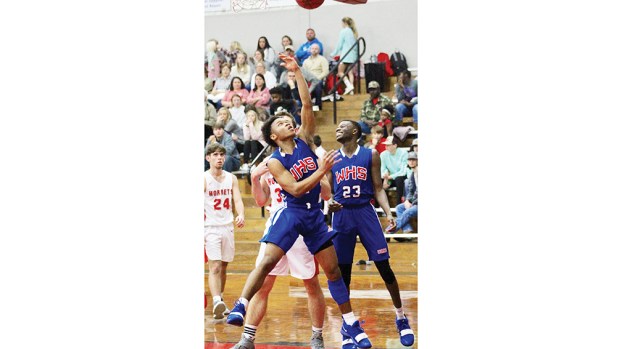 Photo by Katie Furr Wesson senior guard Shemar Dickerson scored 17 points for the Cobras on Thursday in an 82-74 overtime win over Germantown at the Pearl Holiday Tournament. Wesson plays again today at 11 a.m. against Southaven at Pearl.

The Wesson Cobras (14-2) took the best shot the 5A Germantown Mavericks (3-10) gave them on Thursday in the Pearl Holiday Tournament. In the end it was the Cobras who made the big shots late on their way to an 82-74 overtime victory.

Wesson senior guard J.D. Allen continued to be outstanding for the Cobras as he finished with 43 points.

“He’s spending extra time in the gym shooting and it shows,” said Wesson coach Rusty Newman. “If I open the gym up, he’s in there working on his game. He’s really locked in right now.”

Allen has recently picked up an offer from Copiah-Lincoln Community College. On Thursday he scored the first 12 points of the game for the Cobras.

Germantown kept themselves in the game with strong perimeter shooting. The Mavericks made 12 three-pointers with senior guard Hayes Crumpler knocking down seven three-pointers as he led Germantown with 23 points.

Wesson led 26-18 after the first quarter and had a four-point lead at halftime. At the beginning of the fourth quarter the Mavericks had grabbed a three-point lead.

“They ran some good stuff offensively that gave us trouble at times,” said Newman. “We switched up our defenses until we found something that worked. I think they shot around 60 percent from the floor for the game.”

The Cobras finished 20-for-28 from the free throw line and had a shot to win the game at the end of regulation. A Kenner Bizot three-pointer with eight seconds left was no good, but Wesson got two more offensive rebound put back attempts that missed. Junior forward Bizot scored nine points for Wesson.

Once overtime began Allen got hot again and scored the eight straight points to get the Cobras off to a strong start.

Today the Cobras are back in Pearl to take on the 6A Southaven Chargers at 11 a.m.

In the girls’ game the Lady Cobras (1-15) were matched up with a Pelahatchie (7-6) team that made a deep run last year in the 2A playoffs. The Cobras got a team high nine points from Ki’onna Gibson but came up short in a 36-27 loss to the Lady Chiefs.

“We went 12-for-29 from the free throw line and that ended up being the difference in us winning or losing the game,” said Lady Cobras coach Michelle Nunnery. “It’s frustrating because we work on those every day in practice, but the girls played hard enough to win.”

The Lady Cobras meet 6A Clinton High School today at 9:30 a.m. in the Pearl Tournament.