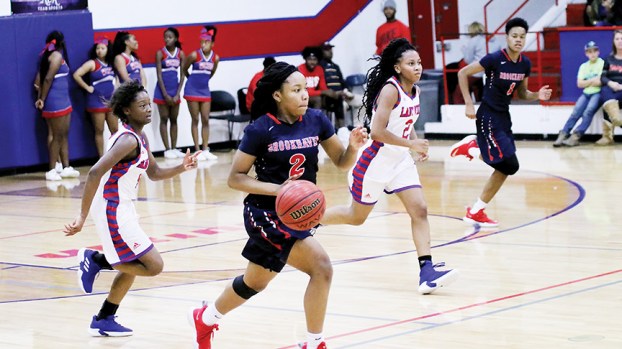 Photo by Becky Green  BHS sophomore point guard Ashanti Louis brings the ball up against Warren Central earlier this season. Louis was one of many Lady Panthers who battled foul trouble on Friday night in a 51-50 win over Forest Hill.

Here is a look at how area teams faired this weekend during high school hoops action.

The Brookhaven High Lady Panthers (18-1, 2-0) won their eighth game in a row on Friday night when they held off the Forest Hill Lady Patriots 51-50 in south Jackson. BHS trailed 24-21 at halftime.

Senior forward Tamia Stallings led BHS with 12 points and 12 rebounds. Junior forward Silentianna Collins scored 11 points and handed out four assists. On the final BHS possession of the game the Lady Panthers led 49-47 coming out of a timeout with under 20 seconds to play. Forest Hill elected not to foul, and Collins got into the middle of the defense where she dished off to Stallings for a game-sealing layup. Forest Hill then raced down for a 3-pointer at the buzzer that provided the final margin.

“We were able to find a way to win,” said BHS head coach Preston Wilson. “Foul trouble and turnovers hampered us.”

BHS finished shooting 32 percent from the floor as a team and starting point guard Ashanti Louis fouled out.

“We got some good production from Cynphoni Thompson, Miyah Miller and Keyana Benjamin throughout the game to help us while we battled foul trouble,” said Wilson. “We’ve got some things to clean up defensively.”

In the boys’ game the Panthers (15-3, 1-1) saw their eight-game win streak snapped as Forest Hill dominated for a 90-48 win. Forest Hill finished as region champs last season on their way to a runner-up finish in the 5A state tournament.

BHS is off until Friday when they travel to Wingfield for another region contest. Forest Hill will visit Brookhaven on Jan. 22 for two games in Sinclair Gymnasium.

The Brookhaven Academy Cougars swept a pair of road games on Thursday and Friday with wins at Amite School Center and Prentiss Christian.

In the boys’ game the Cougars (16-3) cruised to a 58-18 victory over Amite and on Friday they pounded Prentiss 80-12. In the win over Prentiss Dawson Flowers scored a team high 16 points. Cade Brown added 14 points, August Sullivan chipped in 10 points and Trey Fortenberry added nine points. BA led 45-4 at halftime.

In a 67-31 win in the girls’ game Case nearly outscored the Lady Saints herself as she finished with 31 points on seven made 3-pointers. Emily Claire Felder added 10 points, Madison Moak chipped in eight points and Warren scored seven points and dished out 10 assists.

Loyd Star hosted Enterprise on Friday night for a Region 7-2A twin bill and it was the Hornets who picked up a pair of victories.

On Saturday the Bobcats traveled to Waynesboro for a return trip to Wayne County after they hosted the War Eagles on Dec. 22. In the girls’ game it was 5A Wayne County taking a 56-32 win over the Lady Bobcats. In the boys’ game Bogue Chitto dropped a 64-44 loss to the War Eagles.

The Lawrence County Cougars made the trip to Brooklyn on Friday night to take on Forrest County Agricultural High School. In the boys’ game the Cougars (7-10, 2-1) won another close game, this one a 62-60 triumph over the Aggies. LC has seen four of their last six games decided by three points or less.

Lawrence County plays its third straight road game tonight at Sumrall. The Cougars will play on the road again on Friday and Saturday of this week as well.

The Cobras traveled to Marion County on Friday for a pair of games with Columbia and it was the Wildcats who were victorious. Columbia won the girls’ game 51-31 and the boys’ game by a final of 61-48.