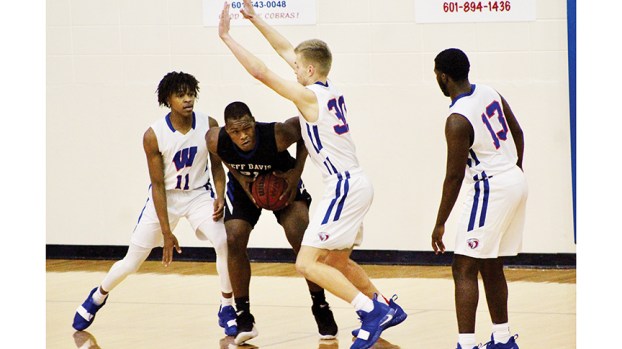 Photo by Cliff Furr Wesson senior guard J.D. Allen (11) and junior forward Kenner Bizot (30) surround a Jefferson Davis County Jaguar as Darrian Gibson (13) looks on on Tuesday night in Wesson. Bizot scored a team high 18 points as the Cobras picked up their first region win with a 65-55 victory over JDC.

You could see it in the posture and body language of the Wesson Cobras as they emerged from their dressing room on Tuesday night — a weight had been lifted off their shoulders as they had just won their first Region 8-3A game of the season with a 65-55 victory over Jefferson Davis County.

The Cobras have had some close losses since division play began with a five-point homecourt loss to Tylertown and a three-point defeat on their own floor to Seminary. Last week Columbia beat Wesson by 13 on the road and what had been a hot start for coach Rusty Newman and his squad had hit a three-game losing skid.

On Tuesday night the Cobras (16-5, 1-3) were locked in a close game for much of the first half as Jefferson Davis County trotted out a long, athletic team. JDC is coached by former longtime Columbia High head coach Tony Woody. As does a typical Woody led team, the Jaguars aren’t afraid to put up shots from deep as they attempted 12 3-pointers in the first quarter. His 2008 Columbia team made the 3A state finals by shooting beyond deep 3-pointers before Steph Curry or Klay Thompson had ever touched an NBA court.

The Jaguars only hit one of their long shots in the first quarter on Tuesday night though as Wesson led 14-13 heading into second quarter. That’s was when Wesson began to build some distance as they led 34-26 at halftime. It was senior forward Ahmaad Harvey who came in and gave the Cobras a jolt in the second quarter as he scored back-to-back baskets to put Wesson up 20-15.

Harvey came off the bench to score 12 points, all from inside the paint. Junior forward Kenner Bizot scored 18 points to lead the Cobra offensive attack. Jefferson Davis County has the physicality that comes from players that also suit up for football. The referees allowed both teams to bang inside and Bizot and Harvey did much of the rebounding work inside as Wesson has lost senior forward J.T. Smith — their strongest rebounder — to an injury for the second straight season.

“We haven’t been getting good spacing on offense,” said Bizot. “Tonight, we had good spacing and made the extra pass and that led to some wide-open layups in the second half. We’ve been pressing to get our first win and tonight we were more relaxed and made the plays to win.”

Another positive for Wesson was winning despite getting their usual 20-point effort from senior guard J.D. Allen. Allen scored 12 points with all but five of those coming from free-throws. As teams have begun to key on stopping Allen, the Cobras have had find ways to create offense.

One tweak that Newman made on Tuesday was sliding Darrian Gibson back to the wing and senior guard Shemar Dickerson back to the point guard spot. Dickerson took the ball into the teeth of the Jaguar defense and was able to drop off assists to wide open teammates.

“We did a good job of moving the ball in the fourth quarter,” said Dickerson. “This one felt good, we needed it.”

In the fourth quarter Dickerson, Allen, Gibson, and Jason Edwards played keep away as Wesson held their lead to a steady 10-12 points throughout the period.

“Ahmaad really stepped up for us tonight” said Newman. “We played better as a team tonight. I put a lot of pressure on them and they responded tonight.”

Wesson travels to West Marion on Friday for another region matchup.