Graduation rates up at area schools 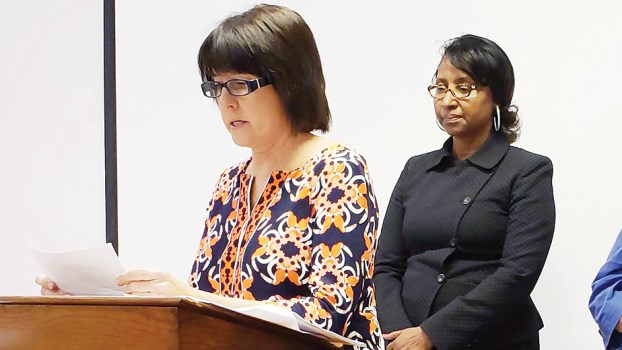 Photo by Donna Campbell Former BES Principal Shelley Riley addresses the Board of Trustees with her attorney Lisa Ross behind her at Tuesday night’s meeting.

An elementary principal fighting to keep her job lost her case Tuesday when the Brookhaven School District Board of Trustees voted unanimously to uphold the superintendent’s recommendation for non-renewal of her contract.

After an hour and five minutes in executive session, the five board members discussed the information dissected from seven days of hearings since May 1 and 50 hours of testimony to rule in favor of Superintendent Ray Carlock who did not renew former Brookhaven Elementary School Principal Shelley Riley’s contract.

Trustees were given transcripts of the hearings — which filled a large binder — in December and heard 15 minutes of summary arguments from each side Tuesday night before meeting behind closed doors to make their decision.

It all came down to Riley’s claims that in 2017 she escorted a special needs student away from the bus area to keep him from harming himself. Carlock said she dragged the student by his backpack.

Riley said she also took a video of an autistic student tearing papers from a hallway wall to garner support from Carlock to get the child an assistant to accompany him through the day. Carlock claims she took the video and did nothing to help the child during a “meltdown.”

Carlock recommended the school board decline to renew her contract — he issued a letter of non-renewal to Riley in March 2018 — saying Riley built a yearlong history of unprofessional behavior and failed to follow district policy regarding management of special-needs students.

While the hearings were held during business hours over the course of eight months, the final arguments were scheduled during the first board meeting of the year, which was Tuesday night. The board took just eight minutes to get through its regular business then proceeded to arguments from Riley and her attorney Lisa Ross and the board’s attorney, Bob Allen.

Because Allen represented Carlock in the hearings, the board hired attorney John Hooks of Jackson as legal consult for the meeting. Hooks said the final arguments would be held in an open meeting, but warned that if the character or reputation of another employee or references to students were made, the board would need to go executive session.

Board member Erin Smith kept time on her cell phone, starting the 15-minute timer when Riley’s side began their summary argument.

Riley spoke on her own behalf first, with her attorney standing with her, and told the board it was not her intention for the situation to stretch into an eight-month ordeal.

“Once false allegations were made against me I had no choice but to defend my character, my reputation and my integrity,” she said. “Some friends and colleagues have suggested that the decision about my career was already made before the first hearing ever took place. I refused to believe this. Instead, I believe that this board has the integrity to have read and studied the testimony and facts presented in this case. They are irrefutable and I pray that each of you will consider all of the information. The overwhelming testimony shows that there is only one ethical decision to be made.”

Riley said she followed local and state policies when she “escorted a frantic student to the bus by his backpack.”

She questioned why written statements and testimony changed in the course of the hearings and why none of the testimony of the witnesses matched. She asked why the dragging offense wasn’t reported to the Mississippi Department of Education or the Department of Human Services when it occurred. She said instead, her reprimand was removed from her personnel file and she was given a “substantial” raise.

She asked the board to picture the accusation that Carlock had made.

“It is not possible to pull someone on their knees by the loop of their backpack,” she said.

Riley addressed the other incident involving her recording a student in the middle of a tantrum, saying it was an effort to show Carlock proof the student needed an assistant throughout the day.

She claimed the superintendent manufactured his case as grounds to terminate her.

“I love my job as principal and have no desire to quit,” she said, her voice breaking.

She asked the board to consider the facts and “available audio tapes and testimonies that has not been offered by the superintendent.”

Riley said she has suffered because of Carlock’s statements.

“The current superintendent has manufactured false claims against me, tarnishing my reputation, causing me to become the victim of slander, manipulation, retaliation, coercion and harassment,” she said.

After six of the 15 minutes Riley was allotted ticked by, her attorney began her argument, rehashing the testimony in the transcript.

She said Riley followed the board’s policy that she should “do what she needed to do temporarily to keep the child from hurting himself or hurting others.”

For Riley, it was called escorting him to safety. Carlock called it dragging.

She argued that Carlock didn’t report the violation until Riley refused to resign.

Ross repeated Riley’s statement that the intent of the video of the autistic student’s tantrum was to garner an assistant for the child.

“The superintendent claims that Mrs. Riley didn’t follow district policies and procedures, but she did,” Ross said.

She began a slideshow to support her argument.

“I have prepared a Powerpoint,” she began but was interrupted by Smith’s cell phone timer.

Board President Willie “Doc” Harrison warned Ross her time was up.

“Sir, if I may conclude. This is not going to take long, but this hearing was not conducted in 15 minutes. I don’t know anywhere in the rules that it says that it has to be limited. I have prepared…” she said. “You want to stop now? You don’t want to hear Ms. Riley’s side?”

Hooks said the board wouldn’t mind a sentence to finish the summary.

“The board has the transcript of the hearing. As you know, the board is duty bound to consider information contained only in the transcript and its exhibits to make its decision,” Hooks said.

“And the board is duty bound to hear my statement on behalf of my client,” Ross said.

“I’ve prepared a Powerpoint,” Ross began again, but was stopped by Harrison.

“Do you have just a sentence you can conclude with?” he asked.

“If you can stop interrupting me, sir. It may not be a sentence but I’m going to try to wrap this up,” she said.

“No, this is a public meeting and you cannot tell me…,” she said, but was stopped again by Hooks.

“Your presentation is concluded,” he said.

“It may be concluded because the board wants to limit me to 15 minutes and won’t give me a chance to wrap it up and I keep being interrupted when I try,” she said.

“I may be done here but it won’t be the last time you’ll see me. Thank you very much,” she said.

He pointed to the transcript that he said shows the superintendent’s reasons for not renewing Riley’s contract.

He said the board would determine through the evidence that the reasons are valid and not in violation of Riley’s constitutional or statutory rights.

Allen said there was no question that Riley had dragged a student down a hallway.

“He (Carlock) said she admitted to him that this had taken place in his testimony,” Allen said. “You can read that for yourself and you can determine for yourself if these charges are trumped up or if they’re, in fact, true.”

Witnesses, even for Riley, said she dragged the child, Allen said.

The board agreed and upheld the non-renewal of Riley’s contract.

After the meeting, Carlock said the board will now be tasked with hiring a principal based on his recommendations. He did not say when that will be.